The legal justifications for the ban seem dubious. 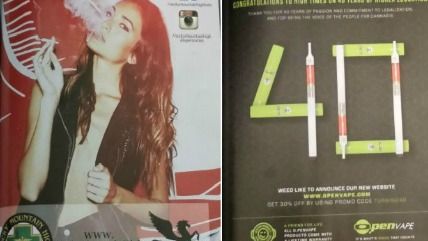 Last month U.S. Postal Service officials in Portland, Oregon, announced that periodicals containing marijuana ads are "nonmailable." That came as a surprise to Oregon newspaper publishers, many of whom depend on the mail to deliver part of their print runs and some of whom sell space to cannabusinesses, which are legal under Oregon law. While publishers knew those businesses are still considered criminal enterprises under federal law, it never occurred to them that a single dispensary ad could make an entire issue untouchable by the USPS.

Members of Oregon's congressional delegation were surprised too. Last week four of them—Sens. Ron Wyden and Jeff Merkley, plus Reps. Earl Blumenauer and Suzanne Bonamici, all Democrats—sent a letter to Postmaster General Megan Brennan, asking whether her underlings in Portland were freelancing or stating a national policy. "It appears a clarification of USPS policy is needed for state-legal marijuana businesses who seek to mail advertisements, as well as newspapers or periodicals that may run ads from marijuana businesses and who rely on the Postal Service to distribute their publications," they wrote.

So far no clarification has been forthcoming from Brennan. But this week USPS officials in Alaska, where marijuana is also legal, said they take a similarly dim view of messages related to cannabis commerce. "The law applies to all states," a spokesman for the USPS district office in Anchorage told the Alaska Dispatch News. "It applies to all marijuana ads. It is a federal law."

Which law is that? According to the Portland notice, it's 21 USC 843(c), which "make[s] it unlawful to place an ad in any publication with the purpose of seeking or offering illegally to receive, buy, or distribute a Schedule I controlled substance." But that provision, which carries a penalty of up to four years in prison, applies to the person who places the ad, not to the mailman who delivers a newspaper containing the ad.

As the USPS notes, 21 USC 843(c) does not apply to literature "which advocates the use of [illegal drugs], which advocates a position or practice, and does not attempt to propose or facilitate an actual transaction." Hence High Times remains mailable, except for issues that include ads for marijuana merchants, as the magazine's 40th anniversary issue last year did (see left).

The Portland notice also cites a USPS regulation that "restricts any advertising, promotional, or sales matter that solicits or induces the mailing of any article described in PUB 52 as hazardous," which includes illegal drugs. "If an advertisement solicits the mailing of controlled substances such as marijuana," the notice says, "it would violate USPS mailing standards." But unless a business offers to deliver its products by mail, that description does not apply to ads placed by pot shops, growers, or manufacturers of marijuana products.

It looks like USPS officials are not worried about avoiding criminal culpability or about enforcing mail regulations so much as playing their part in fighting the war on drugs. While "the authority for enforcing the Controlled Substances Act and implementing laws rests primarily with the Drug Enforcement Administration," the memo says, "the USPS cooperates with all other agencies in preserving the laws of the United States."

That stance raises additional legal issues. As Wyden et al. note, the DEA itself is barred by Congress from interfering with the implementation of state medical marijuana laws, and trying to block dispensary ads arguably violates that injunction. The USPS policy may also be inconsistent with the First Amendment. Although the Supreme Court has said ads proposing illegal transactions can be banned, it is not clear whether that free-speech exception applies when the transaction is legal under state but not federal law.