Allowing states to issue their own guest worker visas will enhance national security and economy. 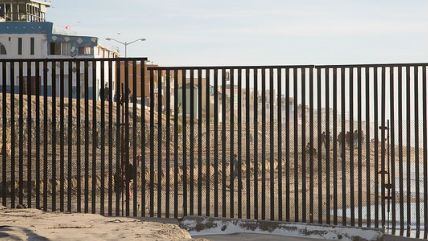 Over the last decade, neither Republican president George W. Bush nor Democratic Barack Obama has succeeded in

prodding Congress to enact immigration reform. That's because Congress can't find a way to balance the contradictory demands of labor, business, and talk-radio restrictionists. Meanwhile, as the economy gathers steam, industries in many states are facing a paucity of workers at all skill levels.

But there might be a way out of this logjam. How? By embracing a more federalist approach that gives states flexibility to craft their own immigration policies. This might sound radical but the under-reported story is that states have already been trying to do this and Canada did it 18 years ago. Even Sen. Jeff Sessions (R-Alabama), who has torpedoed many a reform effort, praised Canada's provincial program at a Heritage Foundation event last year as a model for America because it allows an orderly matching between foreign workers and local labor needs.

Thanks to an improving Mexican economy and aggressive immigration enforcement, net illegal migration from Mexico to America has dropped to zero, according to the Pew Hispanic Center. The upshot is crucial gaps in the construction, cleaning, landscaping, farming, crab fishing, hotel, tourism, restaurant, and many other local industries that have been relying on undocumented labor since existing visa programs for low-skilled foreign workers are either woefully inadequate or unusable.

The National Restaurant Association expects to add 1.8 million positions in the next decade—a 14 percent boost in its workforce. But the 16-24 native-born U.S. workforce that fills these jobs isn't expected to grow at all—so either restaurants hire foreigners or the industry faces retrenchment. Similar labor shortages have forced American growers in California, Idaho and many other states to move to Mexico. Direct U.S. investment in Mexican agriculture has increased seven-fold in recent years.

Industries relying on low-skilled labor aren't the only ones suffering. A shallow STEM-worker pool is stymying high-tech companies in California and Washington. Massachusetts' start-up sector has been facing an exodus of highly qualified foreign students graduating from the Bay State's world-class universities because they are unable to obtain H-1B visas.

To deal with the problem, Massachusetts last year implemented the ingenious Global Entrepreneur In Residence programs. Start-ups, where the employee is also the founder of a company, have nowhere to go for visas because H-1Bs don't apply to them. But under the GEIR program, these students are placed in participating universities where they can incubate their businesses. Universities then sponsor them for H-1B visas as university employees, something that is especially clever since they are exempt from the annual H-1B quota that other employers face.

Nor is Massachusetts alone in pushing state solutions. Fed up with Uncle Sam's insensitivity to their labor needs, lawmakers in about eight states in recent years have pushed resolutions or bills demanding permission from the federal government to craft their own immigration programs. These include not just blue states like California and New Mexico but also arch-red ones like Texas, Utah, Oklahoma, Kansas, Georgia, and, even, Arizona.

Utah, New Mexico, California, and Kansas have all flirted with guest worker programs for undocumented aliens to both protect mixed-status Hispanic families in their states and to avoid labor disruptions for local businesses. Utah's conservative legislature overwhelmingly approved legislation in 2011 that would allow undocumented workers who meet certain requirements to obtain a two-year guest worker visa to live in the state. The program was supposed to have been implemented two years ago but was postponed till 2017. Why? Because immigration is constitutionally a federal function and the state needs a federal waiver or permission. But the Obama administration has been dragging its feet, maybe because letting a conservative state implement pro-immigration policies won't have a political upside like unilateral executive action.

Likewise, the Texas legislature has three bills pending that would let Texas employers hire foreign workers from abroad on temporary work visas. But this program too will need federal authorization.

One way to release states from the political whims of sitting administrations would be for Congress to pass a law giving states statutory authority to create their own guest worker programs just as Canada has done through its highly successful Provincial Nominee Program.

Under the PNP, each of Canada's 13 provinces gets a quota based on its population to hand out permanent residencies or green cards, as I've written. They can sponsor foreigners for almost any reason but most use the program to fill labor gaps. Some provinces have even lured foreign techies stuck in America's green card labyrinth.

Ottawa's role is confined to conducting security or health checks on those sponsored—leaving the planning of local labor markets to the provinces. This divides central and provincial authority based on each side's primary interest, as behooves a federalist system. But the big advantage of this approach in times of heightened concern for national security is that it'll allow Uncle Sam to concentrate on conducting thorough background checks on prospective workers rather than dissipating its energy on redundant regulations.

However, notes Niskanen Center's David Bier, who has drafted a federal bill to create a pilot program along the lines of the PNP in the U.S., America can begin by letting states hand out an average of 5,000 work visas—not green cards—to recruit foreign workers of their choice. These visas could be renewed indefinitely and their holders would be eventually eligible for green cards, just as H-1Bs currently are.

Although these workers would be confined to employment in the sponsoring state, they would have far more labor mobility than under the current system where visas tether them to a single employer. Moreover, it would be possible under this scheme, notes Bier, for participating states to form compacts allowing foreign workers to take jobs anywhere in the consortium.

The beauty of the program is not just that it would cut an enormous amount of red tape by letting states—instead of Uncle Sam—perform (or not) a labor certification to ensure that foreigners are not displacing native workers.  By giving states more control over immigration flows, the program would change the incentive of states to treat foreigners like assets—not liabilities.

States could eschew participation if they fear a strain on their public services—eliminating a major restrictionist objection that has stymied national reform. But they'd pay an economic price as businesses—and tax revenues—moved to states with plentiful labor.

Some might worry that immigrants would use a state visa to enter the country but then relocate to another state or overstay. But immigrants have little incentive to live illegally when usable legal options are available, especially since illegals earn 22 percent less for the same job than legals, according to Princeton University's Douglas Massey's research. What's more, even though foreigners admitted through Canada's PNP are free to relocate immediately, the average three-year retention rate of provinces is close to 80 percent, as a Cato Instiute study notes. The main reason is that the program allows such a granular matching between immigrant skills and local jobs that few need to leave for job opportunities elsewhere.

But to placate worries about foreigners skipping town or overstaying, Bier's proposal would set a 97 percent compliance target for participating states. States that miss this target would face a 50 percent decrease in their visa allocation for each year of non-compliance. Conversely, those that meet them would get a 10 percent increase. This would give states an incentive to enforce their own programs.

The immigration debate in America has become distressingly focused on militarizing the border and draconian interior enforcement. But a federalist solution that lets states experiment with different immigration strategies offers a realistic compromise in line with conservative principles. It is something that all Republicans—even restrictionists—should not just embrace but champion. This will turn them from cranky, nay-saying obstructionists to innovative, yay-saying reformers and let them steal an issue from Democrats.

A version of this column ran in the Wall Street Journal.