John Kasich's Plan To Propagandize for "Judeo-Christian Values" Is Ridiculous, But Not For The Reasons You Expect. 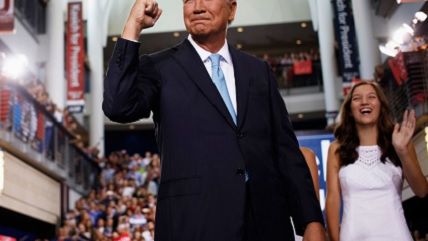 Though popular in his home state of Ohio, Gov. John Kasich has made a terrible showing in his bid to become the Republican presidential nominee. Indeed, after the last GOP debate, Kasich pulled "the least favorable numbers ever seen" in one of pollster Frank Luntz's focus groups.

His latest proposal is unlikely to help his candidacy much. In a national security speech yesterday delivered in the wake of last week's terrorist bombings in Paris, Kasich said the United States should create a "new agency" that would propagandize in favor of "Judeo-Christian Western values" in the Middle East, China, Iran, and Russia.

The full speech, given at the National Press Club, is online.

Last Friday in Paris it was made obvious to the world yet again that there is an enormous chasm between the worldview of civilized people and the worldview of those who committed these acts of horror. We believe that life has value and meaning. They see no value even in their own lives, let alone others….

There can be no negotiating and no delay with this darkness. We must simply defeat it….

We live in the light of God's love for all creation. They pervert and hijack one of the world's principal religions….

We must be more forceful in the battle of ideas. U.S. Public Diplomacy and International Broadcasting have lost their focus on the case for Western values and ideals and effectively countering our opponents' propaganda and disinformation. I will consolidate them into a new agency that has a clear mandate to promote the core Judeo-Christian Western values that we and our friends and allies share: the values of human rights, the values of democracy, freedom of speech, freedom of religion, and freedom of association. And it should focus on four critical targets: the Middle East, China, Iran, and Russia.

Let's leave aside questions of the separation of church and state, or even how promoting explicitly "Judeo-Christian" values will play not simply to Muslims but Hindus, Orthodox Christians, and believers in other faiths (including, to be ecumenical about it, non-believers). If Graeme Wood is at all correct in his hugely important "What Does Isis Really Want?" Atlantic essay, casting the conflict between Islamic jihadists and Western "civilized people" in explicitly religious terms is reading directly from the script that ISIS and other theologically motivated Islamic terrorists have written. And let's leave aside for the moment, too, precisely what sorts of programming a Radio Free Christian Values might create and whether it could possibly be successful.

First, he presumes that terrorism in the West can be stamped out completely, like cutting out a tumor that will never recur. In fact, terrorism is like crime. It's a chronic condition of "civilized" life. It can be managed and minimized but not eradicated. As Ohio State's John Mueller has argued, creating overreaction among the targeted population is precisely the goal of terrorists, especially when they pose no conceivable existential threat to a given society or country.

France and other countries (including the United States) undeniably face internal security issues. How well are governments monitoring known or suspected terrorists (and how careful are they being in not using their powers to surveil all sorts of other people)? By sending warships to the Persian Gulf and bombing targets in Syria and Iraq, Francois Hollande is compounding France's domestic problems by launching a new cycle of actions that will only end up bringing more attention to the terrorists' cause.

In the 1980s, France responded to terrorism from Lebanon with retaliatory attacks in Beirut and Damascus, Syria, and eventually by sending ground forces to Lebanon. But this did little to improve their terrorism problem, and they soon had to bring the fight against terrorism home. France lacks the power to go abroad to address the root causes of Middle Eastern conflicts and Islamist extremism. Geography and globalization mean that isolating France is simply impossible. Securing the homeland is really the only path to greater safety.

The same is broadly true for the United States, despite our vastly larger economic and military footprint on the globe.

Which leads to the second way in which Kasich's idea is simply ridiculous. To the extent that he is serious about America exporting liberal values of freedom of assembly, speech, and religion, he is actually calling for a wholesale re-examination of U.S foreign policy. His remarks seem profoundly disconnected from the past dozen-plus years of actual American military adventures in the Middle East and Central Asia, and not simply in Iraq and Afghanistan. For istance, the United States propped up dictators such as Hosni Mubarak, who had little use for Western values when it came to maintaining order. Until we allowed that it was time for him to go, at which point, we also exerted pressure to remove the democratically elected government that rose up in his wake (whether you think of these as good or bad things is independent from the implications of Kasich's speech).

Like Ted Cruz, Kasich seems to believe that terrorism is happening because America is not projecting enough military strength around the world. After introducing the idea of a government agency devoted to promoting Judeo-Christian values, Kasich turned to Ukraine (we need to be doing more to defend it and new NATO states, he avers), China (we need to be more confrontational and hem in that country's desires for more global power), and the U.S. military more generally (again, more is better). "Rebuilding our military is no easy task," Kasich, said. "We know it'll be expensive." Kasich again seems disconnected not from some distant, rosy past but the immediate past, in which defense spending grew exponentially under George W. Bush and Barack Obama before declining slightly over the past several years as we wound down the wars in Iraq and Afghanistan. With a baseline defense budget of about $600 billion dollars—a massive increase over where it started out in the 21st century—it beggars the mind to say that the military needs "rebuilding."

Which is to say that although Kasich started out talking about America's civic religion—freedom of speech, assembly, and religion—he ended up talking about feeding more dollars into the precise military-industrial machine that has spent virtually all of the 21st century prosecuting and losing two elective wars. If the only way to fix our past failures is to repeat them once again, this time in the name of Judaism and Christianity, we're in bigger trouble than Kasich has pointed to.