See if they can make their silly charges stick on one guy, then either drop charges or likely see the other 105 plea out. 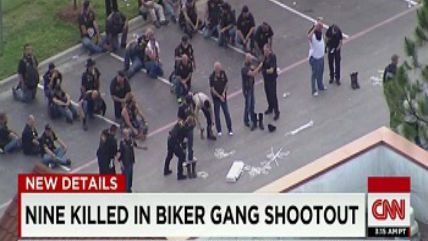 My reporting on the Waco biker slaughter case from June until October has led me to suspect that it is very likely the government had no good reason to arrest the vast majority of the 177 it arrested after a massive shooting slaughter outside the meeting of a multi-club biker meeting called the Confederation of Clubs and Independents at the Twin Peaks restaurant in May. (Who fired the shots that killed nine and wounded 18 is still unknown, though the cops say the bikers were wildly shooting each other and police. Eyewitnesses saw and heard it differently.)

This week Paul Looney, lawyer for an arrestee, made a bold public gambit, reported by Houston Chronicle. Looney says the state should just put his client Cody Ledbetter on trial right now and test their ability to win on any of the prosecutions, given how much it would cost them in time and resources to try the 106 still in their legal maw:

Depending on what happens to his client, Cody Ledbetter, an army of bikers are going to quickly waive their rights to a trial and beg for plea agreements, or prosecutors are going to have to start dismissing charges, he said…

"At least 106 cases have been indicted on the identical novel legal theory," [a Looney court filing] continues," that the defendants, by arriving at Twin Peaks for a bike-club informational meeting wearing motorcycle jackets bearing either the insignia of the Cossack or Bandido Motorcycle Clubs, were making a "show of force" for a "criminal street gang," and therefore were guilty of participating in organized criminal activity."

Looney and other defense lawyers have argued that the overwhelming majority of the bikers committed no crime and that they are members of motorcycle clubs, not criminal street gangs.

The thinking, Looney said, is that if the judge agrees that the bikers did not break the law just by showing up at Twin Peaks, then the case for most if not all the bikers stops right there and everyone goes home.

Looney sees it this way: if Ledbetter loses, then that novel legal notion of the state's can quickly be tested via appeal. Given that many of the arrestees are seeking both independent trials and possible changes of venues over bad local publicity, it will be quite a complicated mess for the state to proceed with full trials.

But until this idea that the bikers were criminals just for being there has been tested, most attorneys will be understandably reluctant to plea out. Looney thinks if the state loses with his guy, then they can save themselves a lot of trouble by dismissing charges. And if the state wins, they likely save themselves lots of trouble by having most of the bikers plea out, faced with the strong possibility they would also lose at trial.

No one, by the way, is being charged with actually shooting or stabbing anyone. Who did any of that shooting and killing, as above, still unknown, and it is starting to seem as if the state wants it that way.

Looney's document is readable in full at the Chron site.