The decision could ultimately lead to decriminalization of cannabis consumption and home cultivation. 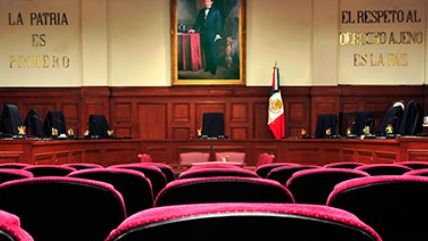 Mexico's Supreme Court yesterday ruled that individuals should have the right to grow, possess, and consume marijuana. According to the official summary of the decision, the court's criminal division concluded that the right to "free development of the personality" includes the freedom to enage in recreational activities, subject to restrictions "necessary to protect health and public order." In the court's view, the damage caused by consumption and noncommercial production of marijuana is not "of such gravity as to warrant an absolute ban."

The court was responding to a lawsuit brought by activists who asked COFEPRIS, the national agency in charge of regulating drugs, for permission to use marijuana. When COFEPRIS said no, the applicants challenged the its decision in the courts. According to The New York Times, the Supreme Court's ruling applies only to the cannabis consumers who brought the case. "For legal marijuana to become the law of the land," the Times says, "the justices in the court's criminal chamber will have to rule the same way five times, or eight of the 11 members of the full court will have to vote in favor."

Assuming one of those things happens, it sounds like the resulting policy would be not full legalization but decriminalization of consumption and home cultivation—something like the current situation in Washington, D.C., where Congress has prevented local officials from licensing and regulating marijuana businesses. "If Mexicans are allowed to grow and consume their own marijuana, casual users will not have to commit a crime to obtain it," the Times says. "Marijuana users are currently vulnerable to extortion by the police and are locked up by the thousands every year on charges of consumption and possession."

The Times cites an estimate that "60 percent of the inmates sentenced for drug crimes [in Mexico] were convicted in cases involving marijuana." It's not clear how many of those inmates grew or possessed marijuana for their own use, as opposed to distribution. The latter category of marijuana offenders, which in the U.S. accounts for a small share of arrests but the vast majority of jail and prison sentences, would not be affected by a policy that merely allows consumption and noncommercial cultivation.