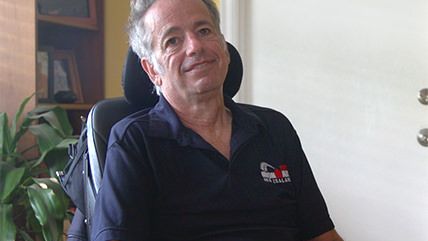 Our story thus far: The Food and Drug Administration (FDA) is famous for its plodding, slow-moving, and life-destroying bureaucracy.

More than a dozen states have passed "right to try" legislation, which allows terminally ill patients access to drugs that have passed some but not all levels of FDA approval. The idea is that such people literally have nothing left to lose and much to gain. And their gain may well be society's too.

California's legislature recently passed right to try. When it got to the desk of Gov. Jerry Brown, he vetoed it:

In a veto message, Brown said "patients with life threatening conditions should be able to try experimental drugs" but that proposed changes to federal policies will streamline access to such drugs.

"Before authorizing an alternative state pathway," he wrote, "we should give this federal expedited process a chance to work."

Would that Brown could have sat down to talk with David Huntley, who died earlier this year from Lou Gehrig's Disease (ALS). In this recent Reason video, Huntley, with the help of a vocoder since the disease had robbed him of the ability to talk normally, makes a heart-breaking and perfectly rational argument in favor of right-to-try legislation. Brown's sleep should be haunted by Huntley's plea.

For more on Huntley and right to try, go here.