With the police still withholding evidence, their behavior during and after the "biker massacre" and mass arrests still very suspicious. 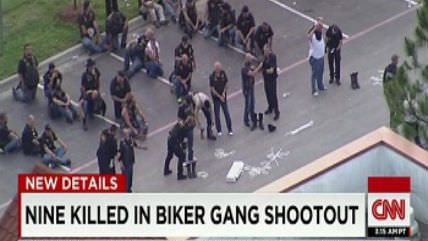 I've been reporting information that casts doubt on the official police story of what supposedly happened outside the Waco restaurant Twin Peaks back in May—a mad biker gun-firing melee shut down by brave cops—for months now.

A reporter from GQ who got to spend some face to face time down in the area with eyewitnesses tells pretty much the same story that seems likely to me: a situation where at best a shot or two from biker on biker led to a brutal police massacre of the innocent—9 dead, 18 wounded (GQ reports 20, but on the day of the event the reported wounded was 18)—followed by face-saving illegitimate arrests of 177.

Excerpts with comments, after reporter Nathaniel Penn delivers some interesting scene-setting explaining the background of the feuds and conflicts between area biker clubs the Bandidos and the Cossacks that likely at least began the violence outside a politically-oriented multi-club biker meeting, the Confederation of Clubs and Independents:

The police were already there as the rest of the clubs arrived that morning. "They're circling like buzzards on a dead deer," one biker told me. "I look at the people I was riding with, and I said, 'This don't look right.' " Afterward, said the Cossacks' John Wilson, "a Waco spokesman was touting the quick 40-second response time of the police, when that was obviously false. They were here."

The bikers believe this provides a clue to the Waco P.D.'s ongoing silence: The cops know their response was overzealous, possibly unlawful, and now they're covering it up. Some bikers believe there's an even more sinister explanation: that a firefight of some kind was supposed to happen—that it was all part of a plan by the Waco P.D. to provoke bitter rivals into a public brawl that could be violently crushed and then used as a basis for sweeping RICO indictments…..

Wilson: I didn't see who fired the first shot. I was told it was a Bandido firing into the ground, trying to break up a fistfight….

Anonymous motorcycle-club member: We heard a pop. Then a few more pops. Your feet start to act. There's pops from the rear, from the front, on the far side. It's like being in a war zone.

Anonymous Cossack #2: I heard projectiles zinging past me, but I didn't hear no gun going off. It was either a silenced weapon or a very suppressed weapon in the distance. I've never been so scared in my life….

The police showed little care for the victims:

Wilson: Not a single law-enforcement person lifted a finger to help any of the wounded. And they made it pretty clear that they were going to be violent if we tried to take our guys to the ambulance. Three men were bleeding out before our eyes. If those men were still alive 30, 40 minutes after being shot, they could have been saved. A prospect named Trainer from out of Tarrant County chapter was shot. They zip-tied him and laid him on the ground next to a Bandido they had handcuffed. I noticed him jerk a few times, laying there. We were sitting there, 30 feet from him, and weren't able to help him. About two hours later, somebody walked over, looked at him, and covered him with a yellow sheet.

The official police narrative quickly became that this was an entire gathering of organized criminals who were wildly killing each other and shooting at cops, and the arrest of so many people there was buttressed with initial one million bonds set for everyone. And likely in order to justify that crazy, and soon reversed, decision:

The Texas Department of Public Safety did its part to ramp up hysteria, leaking a "confidential bulletin" to CNN alleging that Bandidos in active military service were arming their chapters with grenades and C4 explosives so that they could retaliate against the police. One of the DPS's sources was a club called the Black Widows, which does not exist except in the 1978 movie Every Which Way But Loose. In response, one biker blog jeered: "Waco Police Now Claim They Are Being Attacked by Clint Eastwood and An Orangutan Named Clyde."

Some on the scene claim that some supposed Cossacks were in fact undercover cops who even took off their club colors and began behaving as police in the middle of the chaos.

According to Waco police chief Brent Stroman, only three of his 16 officers discharged their weapons, firing a total of 12 rounds. But eyewitnesses dispute that figure, as does the owner of the adjacent Don Carlos restaurant, who has claimed that "thousands of bullet rounds" were fired. Could it be that the department's numbers don't include shots from its undercover officers? And if the bikers were firing at police, as alleged, why hasn't the Waco P.D. released any hard evidence to prove it?

"Harried handgun fights are usually a pretty inaccurate situation," says Cossacks chapter president John Wilson. "Head shots happen by mistake, if at all. Someone got lucky. To have that many guys hit with torso shots and head shots—in my experience, I would say that indicates you had trained people with long rifles and optical sights. That's accurate, aimed fire."

A rival Bandido, who declined to be named, reached the same conclusion: "Seven of the nine [dead] were head shots or chest shots. Who trains for that? Who?"

The rest of the story is about the level of stress the mass arrests put on the Waco jail and court system, and how many of the likely completely innocent men had their professional lives ruined by being locked up for weeks on suspicion of being part of mass murder.

Anonymous motorcycle-club member: When you get out of jail after being gone for 30 days, you don't have a job anymore. I got fired. Nobody wants to hire an electrician with a class 1 felony charge pending above his head.

There is a chance for real justice for the likely illegitimately arrested:

"The city of Waco is looking at paying out hundreds of millions of dollars," says Michael White, Wilson's attorney. "I don't think we've ever seen something on the scale of 175-plus people being arrested for something they did not do." To survive the storm, the city's legal strategy seems to be to pressure the Waco 177 into pleading guilty to minor infractions for time served; this would preclude the bikers from being able to sue for wrongful imprisonment.

Of course, the bad cliches about small town justice hang over the scene;

The judge in the case, Matt Johnson, is the former law partner of district attorney Abel Reyna. Incredibly, the foreman of the first grand jury to be convened, James Head, is a Waco P.D. detective. "He was chosen totally at random, like the law says," Reyna insisted to local reporters. If this seems brazen, consider that the commission to appoint jurors was originally going to be led by Reyna's own father. Reyna only backed down under pressure, acquiescing to the process that led to Head's selection. Asked why he'd permit an active police officer to lead a grand jury investigating possible police misconduct, state district judge Ralph Strother said, "I just thought, 'Well, he's qualified. He knows the criminal-justice system.' "