An anti-drug task force is desperate to show that legalization in Colorado has been a disaster. 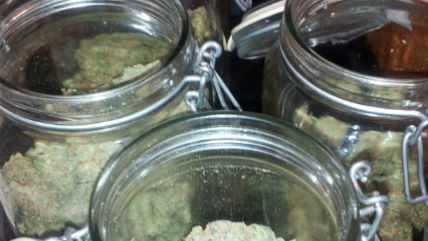 This week a federal anti-drug task force released the third in a series of reports on marijuana legalization in Colorado. As I explain in my latest Forbes column, the main point of the report is to show that legalization was a terrible mistake, even if that means making stuff up:

In 2012 Coloradans approved Amendment 64, which legalized marijuana for recreational use, by a vote of 55 percent to 45 percent. Last February a Quinnipiac University poll found that 58 percent of Colorado voters supported that decision, while 38 percent opposed it and the rest weren't sure.

For prohibitionists determined to portray marijuana legalization in Colorado as a disaster, those poll results are inconvenient, since they indicate that public support for Amendment 64 was higher after more than a year of legal recreational sales and more than two years of legal possession and home cultivation than it was in 2012. Honest drug warriors would acknowledge the Quinnipiac numbers and perhaps try to balance them with other poll results. Dishonest drug warriors would do what the Rocky Mountain High Intensity Drug Trafficking Area (RMHIDTA) does in its new report on marijuana legalization: change the numbers.

The RMHIDTA, a federally supported task force dedicated to suppressing marijuana and other illegal drugs, claims only 50 percent of Colorado voters supported legalization in that Quinnipiac survey—eight points lower than the actual result. It also understates the 2012 vote for Amendment 64 by a point, but the comparison still supports the story that the task force wants to tell: The consequences of legalization in Colorado have been so bad that public support for the policy already has fallen.

Even assuming that the RMHIDTA's misrepresentation of the Quinnipiac survey was a mistake, the direction of the error is not random. You can be sure that if the report had overstated support for legalization by eight points, someone would have caught it before the text was finalized. Which underlines a point that should be obvious by now: Despite its pose as a dispassionate collector of facts, the RMHIDTA, which issued similar reports in 2013 and 2014, is committed to the position that legalization was a huge mistake, and every piece of information it presents is aimed at supporting that predetermined conclusion. So even when the task force does not simply make stuff up, it filters and slants the evidence to play up the purported costs of legalization while ignoring the benefits.