Where Can You Smoke Legal Pot? 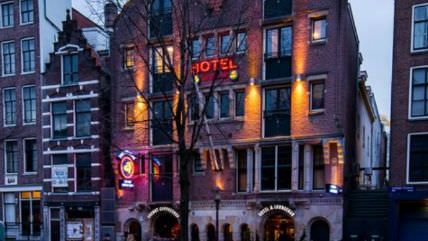 When the Campaign to Regulate Marijuana Like Alcohol in Massachusetts unveiled the text of its 2016 legalization initiative this month, the group highlighted several features of the measure but omitted the most interesting one. The Regulation and Taxation of Marijuana Act would allow consumption of cannabis products on the premises of businesses that sell them, subject to regulation by the state and approval by local voters.

That's a big deal, because until now no jurisdiction has satisfactorily addressed the obvious yet somehow touchy question of where people can consume the cannabis they are now allowed to buy. The legalization initiatives approved by voters in Colorado, Washington, Oregon, and Alaska all promised to treat marijuana like alcohol, which implies allowing venues similar to taverns where people can consume cannabis in a social setting. Yet all four states say businesses that sell marijuana may not let customers use it on the premises.

Although a few "bring your own cannabis" (BYOC) clubs have popped up to accommodate people who want to use marijuana outside their homes from time to time, the legality of such establishments is a matter of dispute. The result is that people can openly buy marijuana without fear, but they still have to consume it on the sly, just like in the bad old days. The problem is especially acute for visitors from other states, since pot-friendly hotels are still pretty rare.

The Massachusetts initiative boldly addresses this consumption conundrum by allowing for something like Dutch-style cannabis cafés. At the same time, it reassures people who don't like the sound of that by permitting such businesses only in towns where a majority of voters have agreed to allow them. Pot pubs also would be subject to restrictions imposed by state regulators, who might insist that they operate more discreetly than Amsterdam's famous "coffee shops."

The initiative says "no person shall consume marijuana in a public place or smoke marijuana where smoking tobacco is prohibited." But it adds that the rule "shall not apply to a person who consumes marijuana or marijuana products in a designated area of a marijuana establishment located in a city or town that has voted to allow consumption on the premises where sold." The question would be put on the local ballot in any city where supporters managed to get signatures from 10 percent of voters.

By contrast, the four states that have already legalized marijuana for recreational use uniformly ban consumption in pot stores. They also impose additional restrictions on consumption that are open to interpretation and leave people uncertain about where it's OK to use marijuana.

Under Colorado's 2012 legalization initiative, Amendment 64, "consumption that is conducted openly and publicly" is still a petty offense punishable by a $100 fine. Different jurisdictions interpret that phrase differently, and not always in the way you might expect. Colorado Springs, a conservative city that has banned recreational sales of marijuana, nevertheless allows BYOC clubs, which it views as analogous to civic organizations like the VFW or the Rotarians. But Denver, the center of marijuana retailing, refuses to allow cannabis consumption in any business open to the public, even if it charges a membership fee. A local ballot initiative conceived by two of Amendment 64's main backers would change that, allowing cannabis consumption in businesses open only to adult 21 or older. The Campaign for Limited Social Cannabis Use recently submitted more than 10,000 signatures to the Denver Elections Division; it needs 4,726 valid signatures to get the measure on the ballot.

Washington's I-502, passed in 2012, bans consumption "in view of the general public," which is punishable by a $50 fine. That phrasing encouraged claims that consumption in places obscured from public view—say, behind the tinted windows of a tour bus or the closed doors of a members-only club—is acceptable. State legislators disagreed. A law that took effect on July 1 makes it a Class C felony,punishable by up to five years in prison, to operate "a club, association, or other business, for profit or otherwise, that conducts or maintains a premises for the primary or incidental purpose of providing a location where members or other persons may keep or consume marijuana on the premises." Among other things, that law banned an adults-only BYOC tent that Hempfest, the annual pot "protestival" in Seattle, put up last year at the city's request.

Oregon's Measure 91, which was approved last November, makes marijuana use "in a public place" a Class B violation, punishable by a $260 fine. It defines "public place" as "a place to which the general public has access," including streets, highways, parks, playgrounds, schools, places of amusement, common areas of apartment houses and hotels, and "premises used in connection with public passenger transportation." The state government advises that "you can use recreational marijuana at home or on private property." It's not clear where that leaves BYOC clubs, but the question will have to be addressed soon. Since July 1, Oregonians have been allowed to grow up to four plants at home, and limited recreational sales (by pre-existing medical marijuana dispensaries) begin in October. People who buy marijuana from the newly legal recreational outlets, especially tourists, will naturally wonder: What now?

Alaska's 2014 initiative, Measure 2, says "it is unlawful to consume marijuana in public," which is a violation punishable by a $100 fine. It does not define "public." In January the Anchorage Assembly unanimously passed an ordinance that bans marijuana consumption in "public places," including "places of business or amusement." But it made an exception for consumption "authorized by a state permit or license or authorized by a municipal permit or lease," which left open the possibility of businesses that cater to people who want to use marijuana in a setting other than a private residence. This month, however, Alaska's Marijuana Control Board published proposed regulations that include a general ban on "marijuana clubs" except when authorized by the board. It's not clear whether the board will ever get around to authorizing them. "This is kind of the demise of the industry," the owner of a pot-friendly hookah lounge told the NBC station in Anchorage.

In Washington, D.C., Initiative 71, approved by voters last November, does not authorize commercial production and distribution of marijuana, but it allows residents to grow marijuana at home and share it with other adults. The initiative eliminated local penalties for marijuana use by adults 21 or older without making an exception for public consumption, suggesting that businesses such as bars and restaurants could allow marijuana use (subject to general restrictions on smoking). The D.C. Council nixed that idea last March by passing an "emergency" ordinance that reaffirms the old ban on consumption in "public space," defined to include "any place to which the public is invited." According to D.C. Deputy General Counsel John Hoellen, "a private club generally is considered a place to which the public is invited," which would seem to rule out members-only BYOC hangouts.

Adam Eidinger, who ran the Initiative 71 campaign, was angry about the D.C. ban. "People should be able to go out, get a babysitter, smoke and then come home and be a responsible parent again," he told The Washington Post. "I want to see that scenario. If we made everyone drink at home, it would be a disaster."

Mason Tvert, who helped run the Amendment 64 campaign in Colorado and is now pushing the Campaign for Limited Social Use in Denver, takes a similar view. "Marijuana's now a legal product for adults in Denver, and it's really time that we give adults a place to use it legally and socially," he told the Associated Press last month. "We shouldn't be requiring that you sit at home if you choose to use marijuana as an adult."

Tvert's initiative, which is expected to be on the ballot in November, will give Denver voters a chance to decide whether they meant it when they said marijuana should be treated like alcohol. But the big test will come next year, when voters in Massachusetts (and possibly in California as well) will decide whether to let pot smokers out of the basement.