Staten Island Cops Drag Man Out of His House at 5:30 a.m., Beat the Hell Out of Him, Charge Him With Nothing

Over an hour-old noise complaint. Victim also claims cops shouted anti-gay slurs as they beat him. 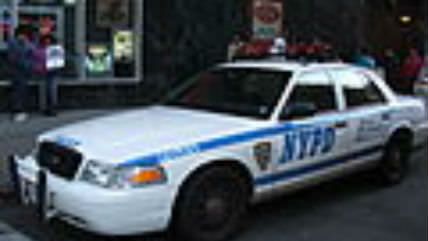 Somewhere out there in America nearly every day, the Thin Blue Line of civilization are behaving like monsters. Yes, policing is hard, especially on the poor sucker who is being policed to within an inch of his life for no reason.

From the New York Daily News. Louis Falcone says that his brother had come home drunk at around 4:30 a.m. on June 19, and the two of them got in an argument loud enough for a noise complaint. About an hour later, after the noise issue was long over, four cops showed up at his door.

Here's what Falcone said happened next, from the News story:

"As I'm talking to them through the screen door, they're saying to come outside," Falcone recalled. "I said, 'For what?"

He said he was shooing Looch away when an officer yanked Falcone outside.

"They threw me against the concrete in front of my house," he said. "My first reaction was to try to get up a little bit."

On the video, one of the officers is seen entering the home. Then, the others try to restrain Falcone on the ground….

"Then they're hitting me for no reason," he said. "One puts his knee on my neck. They were all piling on top of me."

He said he was pleading with cops to be careful with his foot.

"I said, 'Please, I just had surgery on my foot,'" Falcone said. "One of the cops stepped on my foot. Another cop comes and steps on my head."…

Falcone says he was left with a broken nose, two black eyes, cuts to his face and body, and needed more foot surgery.

Video embedded in the News story from across the street shows the beating, though not close up. The audio isn't clear enough to verify Falcone's claim that:

When police arrived, "Falcone became belligerent and uncooperative. He appeared to have been injured in the fight with his brother. As the officers attempted to subdue him, he resisted and spit blood in the face of one of them," a police spokesman said.

"The officers were able to restrain him and he was transported by EMS to a local hospital for evaluation."

Falcone was charged with no crime after being beaten. He "now plans to sue in federal court for civil rights violations, lawyer Eric Subin said."