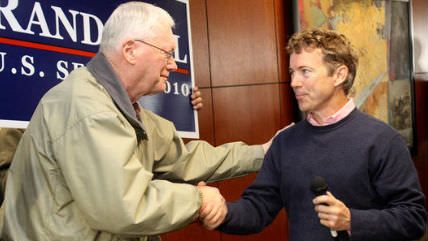 strikes and NSA surveillance ought to think again.

There is no functional difference between the war on drugs and the war on immigration. Both use the power of the state to go after the supposed perpetrators of victimless "crimes" (actually, in the case of immigration, the "crimes" are not only victimless, but have only beneficiaries) while running roughshod over civil liberties and decimating minority communities.

Yet Paul opposes the drug war and supports the immigration war, I note in my column at The Week. He went before the Hispanic Chamber of Commerce and chastised his party's harsh anti-immigration talk in 2013 – only to join in with a vengeance:

After getting elected, one of Paul's first acts was to co-sponsor a bill to end birthright citizenship to deal with the putative scourge of "anchor babies." He opposed the Senate's comprehensive immigration reform bill because it refused to attach his draconian Trust and Verify amendment.

This amendment demanded "100 percent incarceration for all visa overstays or illegal entrants until trial" — even if that meant effectively orphaning the American kids of undocumented parents. What's more, it required Congress to authorize that the border was satisfactorily secured every year for five years before key immigration reforms could go forward. This was an impossible requirement that allowed Paul to be for immigration reform while sabotaging it. It was tantamount to conditioning the end of the drug war on congressional authorization that drug use in America had been eliminated.

Read the whole column for chapter and verse on Paul's immigration contortionism here.

But the best predictor of what Paul will say and do on immigration are the headlines: If the headlines demand pandering to Hispanics, he will; if they demand throwing them under the bus, he will. So much for his minority outreach.