Americans are fighting for their right to garden.

Nick Sibilla | From the August/September 2015 issue 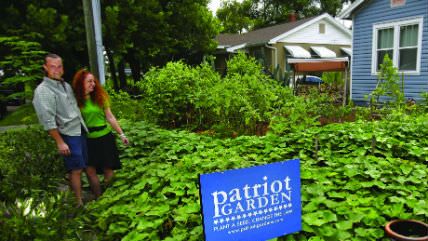 For 17 years, Tom Carroll and his wife Hermine Ricketts tended an organic garden in the front yard of their home in Miami Shores Village, Florida. They grew everything from arugula to zinnias, mostly for home consumption. Then, one day in August 2013, disaster struck.

It wasn't a hurricane, a flood, or a drought. It was the government.

Armed with a newly amended zoning ordinance geared toward home aesthetics, Miami Shores ordered the couple to uproot their vegetable garden or pay $50 a day in fines. The village would tolerate fruit trees, flowers, or even plastic pink flamingoes in the front yard, but the veggies had to go. The couple couldn't afford the fines, so they reluctantly agreed. And then took Miami Shores to court.

The Miami Shores vegetable standoff is part of a nationwide turf war, pitting locavores, environmentalists, and property rights activists against bureaucratic busybodies. In Orlando, a couple faced $500 in fines per day for growing lettuce instead of lawn. Ferguson, Missouri—yes, that Ferguson—cited a stay-at-home dad for daring to plant a garden in his front yard. The Detroit suburb of Oak Park, Michigan, threatened to send resident Julie Bass to jail for three months for her gardening.

"I find it almost incomprehensible that in 2015 there is even a controversy about whether people should be allowed to grow food," Bass says. "That's pretty absurd."

Wanting to avoid pesticides and artificial fertilizers, Carroll and Ricketts realized it was cheaper to cultivate their own food than to buy organic. "With a garden, I can just go out and harvest the exact amount I need for a single meal," Ricketts says. "Nothing goes to waste."

Since their home faces south, the backyard garden is heavily shadowed during Florida's fall and winter planting season; winter vegetables "don't do too well in the back yard where there isn't enough sun," Ricketts explains. But when the couple planted in the front yard, "production was so abundant."

During the garden's salad days, Carroll and Ricketts cultivated nearly 100 different types of vegetables, fruits, berries, herbs, and flowers. When the plot was in full production, "80 percent of my meals could come from the garden," Ricketts says. Bountiful harvests meant that the couple could share the fruits—and vegetables—of their labor with family and friends.

Carroll and Ricketts found themselves hauled before the Miami Shores Code Enforcement Board in August 2013. Ricketts and the Board sparred over the definition of a "vegetable." One board member demanded, "Are you cultivating these vegetables?" The board ruled against the garden and threatened the $50 daily fine; the couple had no choice but to uproot their plants.

But that wasn't the end of the discussion. "You can't live your life being bullied by ordinances," Ricketts says. Searching online for legal help, she came across the Institute for Justice (I.J.), a public interest law firm based in Arlington, Virginia. (Full disclosure: I work there.) She had good timing: I.J. was preparing to launch its National Food Freedom Initiative to defend Americans' food choices from arbitrary regulations. In November 2013, I.J. filed a civil rights lawsuit to vindicate Carroll and Ricketts, along with challenges to Oregon's ban on advertising legal raw milk and Minnesota's severe restrictions on "cottage food" producers.

"Miami Shores is now ground zero in a debate raging nationwide about property rights," says Ari Bargil, I.J.'s lead counsel on the Miami Shores case. "If the government can tell you what you can grow on your property, what can't it do?"

By banning front-yard gardens, Miami Shores infringes on multiple protections offered to property owners under Florida's state constitution. In lofty, Lockean terms, that document defends "the right to enjoy and defend life and liberty, to pursue happiness, to be rewarded for industry, and to acquire, possess and protect property." These "inalienable rights" are fundamental: Regulations that violate these rights can only be upheld if the government offers a compelling interest and demonstrates that its laws are narrowly tailored to achieve that end. Both are high hurdles to satisfy.

Moreover, Florida is one of just a handful of states that amended its constitution to protect a "right of privacy." While the Florida Supreme Court has yet to decide on the matter, in Alaska, which has a similar provision in its constitution, the state Supreme Court has ruled that the right to privacy "shields the ingestion of food, beverages or other substances." The Sunshine State should follow suit.

Last year, Miami Shores attempted to dismiss the case. The village argued that Carroll and Ricketts "have no fundamental constitutional right to a vegetable garden in their front yard." In a motion filed in January 2014, Miami Shores claimed that its ordinance is "designed to maintain the aesthetic appeal of the community" and that "an ordinance based on aesthetic grounds alone is a valid exercise of a city's police power."

But even if courts decline to rule that the garden ban infringes on Carroll and Ricketts' fundamental rights, the couple can still prevail if the government fails to offer a rational basis for its regulations. It's not clear that banning vegetables but allowing fruits and garden gnomes will pass muster.

"Miami Shores' ban on front-yard vegetable gardens doesn't make any sense. A yard does not become unsightly just because you can eat some of the things you grow there," Bargil said.

Plus, aesthetics are by their very nature subjective. "Beauty is in the eye of the beholder," Ricketts said. Noting that her garden teems with butterflies and ladybugs, she added, "Nature seems to enjoy the beauty of my property more than the manicured lawn."

In May 2014, 11th Judicial Circuit Judge Spencer Eig denied the village's attempt to dismiss the lawsuit, meaning the case can move forward. As of this writing, a decision on the merits could come by summer.

Fortunately, some other municipalities are backing away from their anti-vegetable animus.

In Ferguson, Karl Tricamo decided to transform his front yard into an "edible landscape" after the birth of his son. On a 35′ x 25′ plot, Tricamo sowed hundreds of heirloom seeds, including tomatoes, corn, peppers, flax, and amaranth. But soon after he started planting, he began receiving a stream of citations for allegedly violating the city code.

"This was a plain and simple example of petty tyranny," says Dave Roland, the director of litigation at the Freedom Center of Missouri, a nonprofit that came to Tricamo's aid. (Roland is also a former I.J. attorney.) "With Karl, we weren't sure what the penalties were going to be because we didn't know what ordinances they thought they were working with," he adds. "A little due process problem maybe?"

That uncertainty ultimately led the Ferguson Board of Adjustment to dismiss the citation by a vote of 4–1 in July 2012. The sole vote against Tricamo was cast by Board Chairman Joe Schroeder, who called the garden an "eyesore" and said, "It goes against common sense, really, to put a garden in the front yard instead of the back." Since the vote, Roland hasn't heard of any other crackdowns on gardeners in Ferguson.

In Orlando, Jason and Jennifer Helvenston had to battle the city for more than a year to preserve their property. The spiritually minded couple took to home gardening "to care for creation" and to reduce their carbon footprint. Like Carroll and Ricketts, the Helvenstons grew their garden in the front yard for better sunlight.

But in October 2012, Orlando cited them for a "failure to maintain ground covers on property" and threatened daily fines of $500. The Helvenstons then became horticulture cause célèbres, attracting local and national media attention. They even sent out hundreds of packets of radish seeds to raise awareness. Ultimately, in November 2013, the Orlando City Council approved new rules that legalized front-yard gardens, albeit with caveats: A veggie garden can't cover more than 60 percent of a front yard, nor can it be placed alongside public rights-of-way.

The Helvenstons continue to tend to their garden, reaping about 60 percent of their food on-site. "The best way to eat from the homestead," Jason says, is to be "constantly snacking": "Grab a few sweet peas as you walk by, eat some Okinawan spinach as you break in the shade, suck a Peruvian apple cactus in the hot sun, pop a yellow pear tomato in your mouth." The two say they have inspired others in the community to take up gardening and to donate thousands of pounds of organic produce to charity.

"The greatest freedom you can give someone is the freedom to know they will not go hungry," Jason said.

According to the National Gardening Association, food gardening is now a $3.5 billion industry. In 2013, 37 million home gardens were growing food, an increase of four million since 2008. Even First Lady Michelle Obama joined the trend, planting a "kitchen garden" on the White House (back) lawn. Gardeners' most popular motivations: better-tasting food and lower grocery bills.

These green thumbs harken back to a proud American tradition. During World War II, the U.S. government encouraged Americans to grow their own crops, amid widespread rationing for the war effort. Over 20 million "Victory Gardens" eventually sprouted in Americans' yards and on city lots. Toward the war's end, these gardens grew 40 percent of the nation's fresh vegetables. Superman, Batman, and a pants-free Robin graced a 1943 comic book to promote them. A Department of Agriculture official predicted that the movement would "go down in history as one of the greatest civilian activities ever stimulated and organized by man."

Now nanny-state crusaders are threatening this heritage. How can property rights win out?

Towns can curb the power of zoning boards and overhaul their ordinances. Persecuted home-gardeners can alert the press and mobilize support. Julie Bass, the Michigan gardener who could have faced a shocking 93 days in jail, said her story led to town officials "getting excoriated in the media and inundated with calls and emails from people all over the world." After that, the authorities dismissed the charges.

The Helvenstons' story was picked up by both The New York Times and the Drudge Report, leading to reform. In West Des Moines, Iowa, after a public outcry, city officials buried a proposed ban on front-yard gardens in 2013.

As Ricketts waits for a court to decide the fate of her own vegetable garden, she hopes the ruling honors her one simple request: "I just want to be left alone in peace and quiet."

Nick Sibilla is a writer and legislative analyst at the Institute for Justice.