If Jeff Sessions' Anti-Immigration and Free Trade Stances Are the Future of the GOP, It Has No Future. 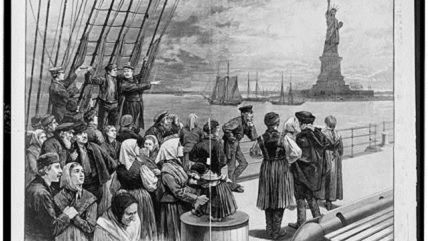 In a recent Washington Post op-ed, Alabama Republican Sen. Jeff Sessions said the United States needs to curb legal immigration along with illegal immigration, and fast. We need a timeout, don't you know, and the only folks who favor letting more foreigners in are monocle-wearing, cigar-smoking elitists:

High immigration rates help the financial elite (and the political elite who receive their contributions) by keeping wages down and profits up. For them, what's not to like? That is why they have tried to enforce silence in the face of public desire for immigration reductions. They have sought to intimidate good and decent Americans into avoiding honest discussion of how uncontrolled immigration impacts their lives.

Yeah, the intimidation on anti-immigration beliefs is so strong that only one of the potential Republican presidential candidates, Jeb Bush, is openly in favor of current (much less expanded) levels of immigration. And note that when Sessions (like a lot of restrictionists) talks about "uncontrolled immigration," he's not even talking about illegal immigration. He's talking about the "million mostly low-wage permanent legal immigrants who can work, draw benefits and become voting citizens."

Sessions' views on immigration are not only factually incorrect, they are influential in the GOP. Gov. Scott Walker of Wisconsin has said that he changed his mind on the topic after listening to Sessions' arguments about restricting newcomers. Walker used to be a lot like Jeb Bush. Not no more.

Elsewhere, Sessions has railed against Trade Promotion Authority (TPA) and the Trans-Pacific Partnership (TPP) for multiple reasons, not least of which is that any sort of agreement "could facilitate immigration increases above current law." Like a good populist, Sessions keeps pushing the idea that TPA, which has been used in such situations since 1974, will somehow lead to Congress voting on a deal it isn't allowed to read ahead of time. That's simply not true. The negotiations between the American team and the other countries are confidential (which makes sense). The TPP will be submitted to Congress for an up-or-down vote. Not secret.

As I wrote at The Daily Beast this week, Republican animus against i

Last fall, an NBC/Wall Street Journal poll found that 60 percent of Americans want to give illegals a path to citizenship—a figure that that "jumps to a whopping 74 percent if you qualify that the undocumented immigrants must take steps like paying back taxes."

From my Beast column:

In the 2012 election, Mitt Romney pulled just 27 percent of the increasingly important Hispanic vote. That was despite the fact that Barack Obama is, in Nowrasteh's accurate term, "Deporter in Chief" who repatriated more immigrants far more quickly than George W. Bush. Hispanics aren't stupid—44 percent of them voted for immigrant-friendly Bush in 2004. They knew things could always get worse and probably would for them under Romney.

With 2016 coming into clearer and clearer focus—and with Hillary Clinton doing her own flip-flop on immigration and now embracing newcomers—the GOP and its presidential candidates have a choice to make. They can follow Ronald Reagan's example and embrace libertarian positions on immigration and free trade. Or they can follow Jeff Sessions's retrograde populism and see just how few Hispanic votes they can pull.

Good luck with the future, Republicans, if you follow Jeff Sessions' lead on immigration.