Expect an outcome focused on processes and procedures, not consequences. 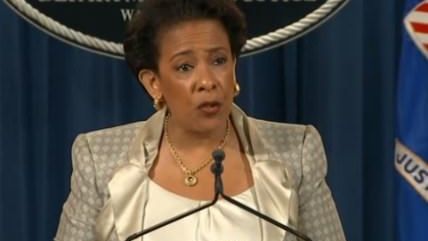 This morning new Attorney General Loretta Lynch announced that the Department of Justice (DOJ) is shifting gears in Baltimore. They had been conducting a "collaborative review" of Baltimore Police Department policies and practices, but at the request of Mayor Stephanie Rawlings-Blake, the DOJ is now going to perform a full civil rights investigation to examine the police's use of force and possible discriminatory behaviors.

In her press conference, Lynch said there were "generations of communities who feel separated from government overall" in Baltimore and said there was a "serious erosion of public trust" in Baltimore.

No kidding. The death of Freddie Gray is just the most visible and most recent of problems with the Baltimore Police department. Reason's Ed Krayewski had been highlighting the department's problems long before Gray's death. Here's NBC responding to today's news (video of the press conference is also at the link):

The Justice Department wrapped up a similar investigation of the Ferguson, Missouri, police in March. That investigation found that the department routinely violated the Constitution, engaged in racial bias and focused on making money over public safety.

And last year, the Justice Department concluded that police in Cleveland had engaged in a pattern of "unreasonable and in some cases unnecessary force," including shootings, blows to the head and excessive force against the mentally ill.

Lynch at the press conference also pointed out how frequently these investigations are coming with the full cooperation or even the request of the cities being examined, as is happening here. But here's what folks need to know about these investigations: They are all about fixing processes and procedures. They are not about holding people accountable. In other words: what the DOJ will provide here is guidance on how to not be violent thugs as police officers. It will treat all this abuse, those "nickel rides," where police deliberately drive unsafely to cause harm to passengers, as though these are training problems.

For evidence, let's take a look at a law enforcement agency that hasn't embraced the assistance of the Department of Justice with open arms: Maricopa County, Arizona, home of Sheriff Joe Arpaio. In 2011, the Department of Justice produced a 22-page report (pdf) detailing a significant number of severe civil rights violations when the sheriff's department dealt with anybody they suspected of being an illegal immigrant (regardless of whether they were).

Even faced with a hostile, uncooperative law enforcement agency, the remedial measures the DOJ demanded were nevertheless mostly about training, better data collection, a better complaint investigation system, and more community outreach and access. The report seems unable to engage in the idea that this police misconduct is not a result of ignorance of the Constitution or proper procedure, but deliberate indifference to such rules going all the way to the top. There was one whole sentence calling for "clear avenues for adjudication, discipline, and criminal prosecution, if necessary" of misbehaving deputies.

This shouldn't be read as a criticism of the reports and investigations themselves. Rather, this is a reminder that the DOJ's role in fixing Baltimore's problems is very limited. The Department of Justice will not be the ones to save Baltimore from a rogue police department. It is up to the citizens to hold its officials accountable and for the officials to hold the police accountable. As both Krayewski and Shikha Dalmia have previously noted, that's going to be hard to do with police unions protecting rogue officers from discipline and consequences. And we have yet to see anything suggesting the DOJ is willing to take on that toxic dynamic. All those special protections afforded to Baltimore police are part of that adjudication and discipline process the DOJ calls for.

Glenn "Instapundit" Reynolds wrote earlier in the week that federal control over local law enforcement brings in a whole host of other problems. If nothing else, remember that it's the Department of Justice's policies that have led to significant abuse of civil asset forfeiture by local law enforcement agencies across the country against innocent people. The mote in thy brother's eye and all that.