A writer at Slate makes a left-wing case for judicial abstinence. 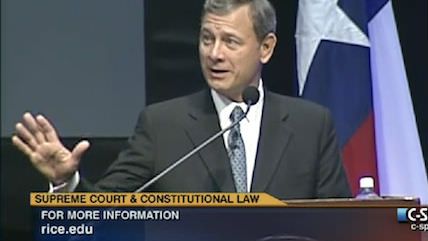 Writing at Slate, liberal pundit Mark Joseph Stern says he is "not sure America's experiment with judicial supremacy has been a great success." Why? Because of the "antidemocratic judicial arrogance" of the U.S. Supreme Court. According to Stern, "when duly elected representatives of the people find that legislation grants 'due process of law' and 'equal protection,' shouldn't that decision be accorded deference by nine unelected judges?" Stern believes that such legislation should receive judicial deference. However, because the Supreme Court keeps refusing to defer to majority rule, something drastic must be done. "The solution here is obvious," Stern declares. "If we want to curb the Supreme Court's power, all we have to do is ignore it."

I wonder how many liberals will heed Stern's call for judicial abstinence. Will liberals join Stern in ignoring the outcome of United States v. Windsor, in which the unelected Supreme Court struck down part of the Defense of Marriage Act, a duly enacted federal statute favored by a wide congressional majority and signed into law by a twice-elected Democratic president named Bill Clinton? What about ignoring the outcome of Roe v. Wade, in which the unelected Supreme Court struck down Texas' ban on abortion, a duly enacted regulation favored by a majority of that state's democratically elected officials?

Come to think of it, liberals would also have to ignore the outcome of Boumediene v. Bush, which overruled part of the duly enacted Military Commissions Act of 2006 in order to recognize habeus corpus rights for prisoners held as enemy combatants at Guantanamo Bay. As Justice Stephen Breyer remarked of that decision (which he joined), "One cannot characterize Boumediene as a case that followed Congressional directions or implemented Congress's broader purposes."

I guess we'll have to wait and see just how much majority rule Stern and his fellow liberals are willing to stomach in their quest to curb the power of the "antidemocratic" Supreme Court.