Marco Rubio Is the Anti-Rand Paul on Foreign Policy 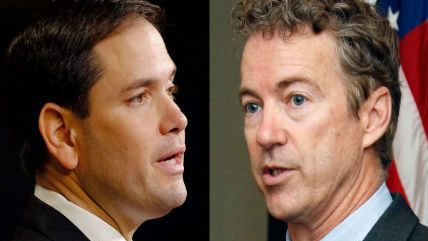 Do you remember the time that the interventionist GOP establishment first sounded the alarm bell against Rand Paul? It was March 2010; Paul the inexperienced upstart was running a Tea Party-insurgent campaign against Senate Majority Leader Mitch McConnell's hand-picked home-state candidate to replace the retiring Jim Bunning, and the likes of Dick Cheney were not tolerating any loose talk about cutting military spending and being less eager to take America to war. Former Cheney aide Cesar Conda circulated a galvanizing letter of warning to people affiliated with the Foreign Policy Initiative, including directors William Kristol, Robert Kagan, and Dan Senor. Excerpt:

On foreign policy, GWOT, Gitmo, Afghanistan, Rand Paul is NOT one of us…It is our hope that you can help us get the word out about Rand Paul's troubling and dangerous views on foreign policy.

Rubio and Rand Paul have been frenemies in the Senate; on the friend side, the Cuban-American rather spectacularly quoted Jay-Z and Wiz Khalifa while helping Paul out during the Kentucky senator's epic 2013 filibuster on U.S. drone policy. But where the two have clashed even before November 2010 is on an area where they now share a committee assignment: foreign policy. The battle between the two men has and will continue to be a proxy war for the internal GOP divide over how the U.S. should conduct relations with the rest of the world. Here is a sample of their past clashes:

* In October 2010, Rubio opposed cuts in military spending, while Paul supported them.

* In November 2011, Rubio quietly sought to obtain a unanimous consent vote in the Senate to hasten the post-soviet state of Georgia's entrance into NATO. Paul single-handedly blocked the vote from taking place, according to reports.

* During their dueling responses to President Barack Obama's February 2013 State of the Union Address, Rubio decried the sequester's "devastating cuts to our military," while Paul argued that "Not only should the sequester stand, many pundits say the sequester really needs to be at least $4 trillion to avoid another downgrade of America's credit rating."

* In June 2013, in the wake of revelations from former National Security Agency contractor Edward Snowden, Paul introduced the Fourth Amendment Restoration Act, while Rubio defended both the NSA and congressional oversight thereof, saying "The world changed after 9/11, and it changed after Boston. It's just a struggle to try to balance our deeply held convictions of privacy and freedoms and liberties with our need to provide for national security."

* In August and September of 2013, Rand Paul led the opposition to Obama's threatened bombing of Syria and warned against arming various competing rebel groups; Rubio surprised many by opposing a Senate resolution on authorizing force, but supported arming the rebels.

* In November 2013, Rubio took a number of veiled shots at Paul in a major foreign policy address, defending foreign aid (a constant Paul punching bag), criticizing "voices [who] have used the increasing uncertainty abroad and the economic insecurity here at home to argue for it's best for America to stay on the sidelines," and dismissing "conspiracy theories sparked by Edward Snowden…. a traitor who sought assistance and refuge from some of the world's most notorious violators of liberty and human rights."

* In February 2014, Rubio and several of his Foreign Relations Committee colleagues sent a letter to President Obama urging "targeted sanctions" against Russia over its meddling in Ukraine. Paul was one of only two GOP senators not to sign, and warned his colleagues against "tweaking" Moscow.

* In January 2015, Rubio urged his Senate colleagues "to consider a permanent extension of the counterterrorism tools our intelligence community relies on to keep the American people safe." Paul is leading the chamber's opposing viewpoint.

* Also in January, Paul squared off against Rubio and fellow 2016 candidate Sen. Ted Cruz (R-Texas) about Iran and Cuba at a donor conference.

* Last month, Paul's controversial (and overwhelmingly defeated) amendment to jack up military spending was an intentional mirror to Rubio's proposed defense-hike, only Paul's had matching spending cuts to go along with it.

There are plenty of other examples as well. While Paul's exact foreign policy positioning remains a subject of intense intra-libertarian debate, Rubio's does not, largely because since the beginning of his career he has generated headlines such as "Accepting the Neocon Torch: Marco Rubio." As I wrote before their SOTU responses two years ago,

Rand Paul may be triangulating from his father and dressing up his imperial scale-back in the questionably fitting clothes of Ronald Reagan and George Kennan, but he rarely passes up an opportunity to tell Republicans that they need to cut military spending and re-think open-ended interventionism. Rubio, on the other hand, is more likely to slam Obama for not being interventionist enough.

Given that the Tea Party for the most part has studiously avoided foreign policy disputes, this contest for its sympathies is genuinely up for grabs.