He is abusing business boycotts 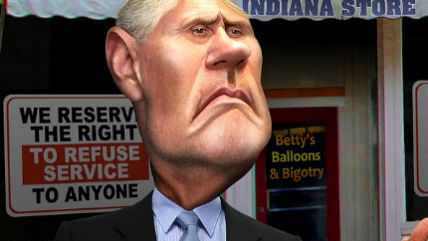 society. One can debate their efficacy, but not their legitimacy. But trust corporations to take a good thing and turn it into crap. The CEOs of Apple, Salesforce (not to mention myriad sanctimonious state officials) are using boycotts to force Indiana to scrap its Religious Freedom and Restoration Act (because, they claim fallaciously, the law will give business owners "a license to discriminate" against gays).

What's wrong with what they are doing? It they were merely boycotting Christian businesses whose beliefs they found abhorrent, it would be one thing, I note in my column at The Week. (After all, I avoid Domino's Pizza because its owner, Tom Monaghan, has expressly noted that he uses his profits to campaign against abortion rights. Losing my dollars won't change his mind, but it makes me feel better and it is no more useless than voting, a folly I occassionally indulge.)

"But what's truly obnoxious about his (Apple CEO Tim Cook's) campaign is that he is using his right not to do business with Indiana, because it's doing something he disagrees with, to obtain a law that would deny Indiana businesses the same right not to do business with folks who they don't agree with. This is simply intolerance masquerading as a crusade for justice and equality — a naked use of brute market power to legislate his views."