Guantanamo Detainee Speaks Out Against Torture From His Prison Cell 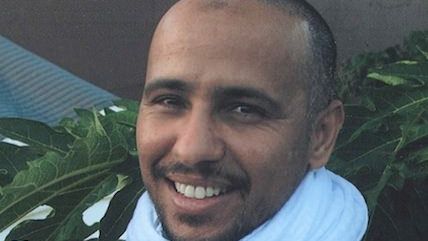 "I cannot believe that the majority of Americans want to finance the detention of innocent people," says Hina Shamsi, a lawyer for the American Civil Liberties Union. She speaks on behalf of her client,Mohamedou Slahi, a current detainee at the U.S. military prison in Guantanamo Bay and the New York Times best-selling author of the recently released, Guantanamo Diary.

Guantanamo Diary is the first account written and published by a still-imprisoned Guantanamo inmate. Slahi finished writing the book in 2005, but it took six years and a team of lawyers to obtain approval for publication. To secure the U.S. government's permission to publish the book, more than 2,500 redactions were added to the manuscript, which remain blacked out throughout the book's text.

The 400-page book details Slahi's harrowing experience since being captured by the U.S. government in 2002 on suspicion of aiding Al Qaeda. His story includes extraordinary rendition, physical and mental abuse, and the nightmarish legal limbo he remains in—Slahi is still incarcerated even though a federal judge ordered his release in 2010. The book debuted at no. 14 on the New York Times bestseller list.

Shamsi sat down with Reason TV's Anthony L. Fisher to discuss the book, her client, and the moral and legal pitfalls of "enhanced interrogation techniques" and indefinite detention.