Lindsey Graham: 'I would literally use the military to keep [Congress in session]…until we restore these defense cuts'

The 2016 presidential longshot wants to love American democracy to death. 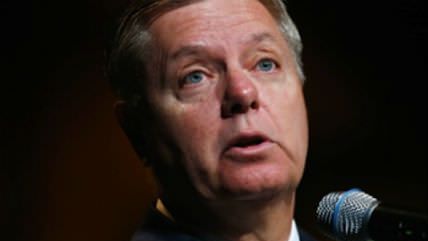 In other news about grotesque Republican authoritarianism, Sen. Lindsey Graham (R-S.C.), the candidate no one outside of John McCain's immediate family wants to run for president, has been caught on tape fantasizing to the Concord City Republican Committee last week about engineering a domestic military coup in the name of jacking up the defense budget:

It's important to observe that Lindsey Graham will not be punished for this. Not by his colleagues, not by the court of public opinion, not by Republicans, not by conservatives. Like his fellow ridiculously over-interventionist colleague Tom Cotton (R-Ark), he can literally say the craziest, most anti-constitutional shit related to national security, and yet about the only time conservatives will let him have it is when he goes all "Grahamnesty" on immigration.

According to the Republican mindset in 2015, Graham and Cotton are wise men on foreign policy, and the only "radical" in the room is Sen. Rand Paul (R-Ky.). That the GOP considers this a winning strategy is worrying enough; that party elders remain this committed to interventionism 14 years into our disastrous nation-building all over the globe strains basic human comprehension.

UPDATE: Graham's office got back to Mediaite, calling the remarks (in Mediaite's paraphrase) a little "over-the-top humor to win over his audience."