Has Chuck Grassley ever seen a prison sentence he thought was too long? 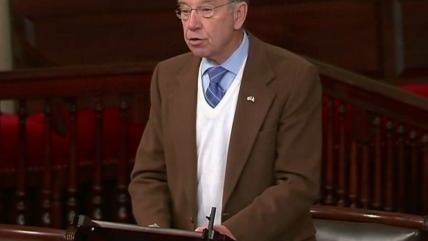 Last week the newly created Coalition for Public Safety, a bipartisan, transideological campaign to reform the criminal justice system, made a big splash by bringing together political adversaries such as Koch Industries and the Center for American Progress. Notably absent from celebrations of this strange-bedfellows alliance: any mention of actual policy changes the coalition plans to pursue.

The lack of specifics was understandable but telling. While there seems to be broad agreement within the coalition about what should be done to "make our criminal justice system smarter, fairer, and more cost effective," the current Congress may settle for little more than lip service to those goals.

The problem can be summed up in two words: Chuck Grassley. The Iowa Republican, who chairs the Senate Judiciary Committee, is not the only legislator who can be expected to resist real reform, but he embodies an outmoded tough-on-crime mentality that must be overcome by Americans who view their country's excellence at locking humans in cages as cause for shame rather than pride.

Grassley's idea of reform begins and probably ends with something called the CORRECTIONS Act. Although it has one of those silly names that is clumsily contrived to generate a meaningful acronym, it is not a bad bill. But it does not go nearly far enough to address the egregious injustices inflicted by our blindly punitive penal system.

The CORRECTIONS Act, introduced by Sens. John Cornyn (R-Texas) and Sheldon Whitehouse (D-R.I.), would allow federal prisoners to shorten their sentences by participating in "recidivism reduction programs" (such as drug treatment or vocational training) and "productive activities" (such as prison jobs). But the bill's limits on eligibility are strict and largely arbitrary, and the relief it offers is limited: 10 days off a "low risk" prisoner's sentence for every 30 days he participates in a qualifying program or activity, with the reduction capped at 25 percent of his sentence.

If the problem is excessively long prison sentences, why not shorten the terms prescribed by law instead of merely trimming some of them after the fact? Grassley, who last year supported an earlier version of the CORRECTIONS Act, is not persuaded by that logic, mainly because he does not think prison sentences are too long.

Two weeks ago, Sens. Mike Lee (R-Utah) and Richard Durbin (D-Ill.) reintroduced the Smarter Sentencing Act, which goes further than the CORRECTIONS Act but not as far as the Justice Safety Valve Act, which Sens. Rand Paul (R-Ky.) and Patrick Leahy (D-Vt.) reintroduced on February 4. While Paul and Leahy's bill would effectively abolish mandatory minimum sentences by allowing judges to deviate from them in the interest of justice, Lee and Durbin's bill would reduce mandatory minimums for various drug offenses, retroactively apply the shorter crack sentences that Congress approved in 2010, and widen the "safety valve" that allows certain low-level, nonviolent offenders to escape mandatory minimums.

That approach was moderate enough to win support from the Senate Judiciary Committee last year, when it was chaired by Leahy. But Grassley, the new chairman, opposed the bill then, and the day it was reintroduced he rose on the Senate floor to condemn it as "lenient" and "dangerous."

In his speech, Grassley equated the requirements for receiving mandatory minimums with violence, which is more than a little puzzling. If you are convicted of growing 100 marijuana plants or selling 28 grams of crack, for example, you are subject to a mandatory minimum sentence of five years—10 if you happen to own a gun. If you plead guilty to mailing more than 10 grams of LSD (counting the weight of the blotter paper) and you have two minor LSD-related priors, you will be sent to federal prison for life. No violence is required.

If Grassley cannot see that injustices like these cry out for a remedy, I'm not sure how he can be persuaded. The Coalition for Public Safety has its work cut out for it.