Tobacco used to be the weed that made you stupid and lazy. 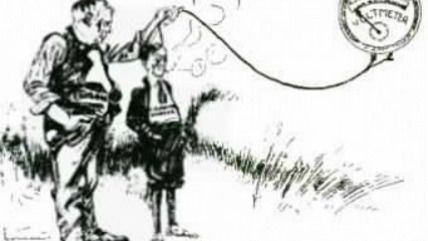 In Going to Pot, his thoroughly unpersuasive defense of marijuana prohibition, former drug czar Bill Bennett warns that cannabis makes people lazy and complacent, preventing them from realizing their potential. There must be something to that allegation, he suggests, because no one has ever said tobacco saps motivation and undermines productivity. But as I explain in my latest Forbes column, that's not true:

In his 1997 book The Selfish Brain, Robert DuPont, the first director of the National Institute on Drug Abuse, describes marijuana's impact on its users' life prospects. "Unlike cocaine, which often brings users to their knees, marijuana claims its victims in a slower and more cruel fashion," DuPont says. "It robs many of them of their desire to grow and improve, often making heavy users settle for what is left over in life…Marijuana makes its users lose their purpose and their will, as well as their memory and their motivation….[Cannabis consumers] commonly just sink lower and lower in their performance and their goals in life as their pot smoking continues. Their hopes and their lives literally go up in marijuana smoke."

In his 2015 book Going to Pot: Why the Rush to Legalize Marijuana Is Harming America, William J. Bennett, the first director of the Office of National Drug Control Policy, quotes that passage from DuPont's book in the course of arguing that cannabis is much more dangerous than commonly believed. "Has anyone alleged anything like the foregoing with tobacco use?" ask Bennett and his co-author, Robert A. White. Since they assume the answer is no, Bennett and White clearly do not realize that early opponents of cigarette smoking claimed it produced symptoms very much like those that DuPont attributes to marijuana.

According to those critics, who included celebrities such as Henry Ford and Thomas Edison , cigarettes made young people stupid, suppressed their motivation, ruined their academic performance, turned them into ne'er-do-wells and delinquents, and rendered them virtually unemployable. The striking parallels between the anti-cigarette propaganda of the early 20th century and the anti-pot propaganda that prohibitionists like DuPont and Bennett continue to disseminate suggest that responses to drug use have less to do with the inherent properties of the substance than with perennial fears that are projected onto the pharmacological menace of the day.