A veteran American journalist wonders if Charlie Hebdo would be legally tolerated in the U.S. 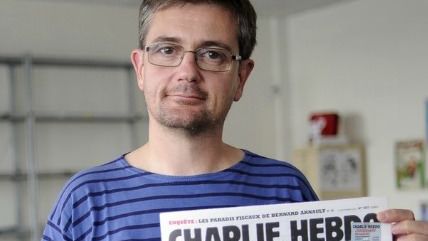 In his final farewell column (apparently there have been several), Edward Schumacher-Matos, NPR's departing ombudsman, announces, "I am not Charlie." He is not saying that last month's murderous attack on Charlie Hebdo (which he inaccurately calls a "bombing") was justified, but he wants to make it clear that he did not care for those cartoons, which he suggests exceeded the proper limits of free speech (emphasis added):

The French news media may have their ethical standards, but they are not American or sacred universal ones, and they shouldn't be French ones either. The United States has never had absolute freedom of the press. And the framers of the Constitution—I once held the James Madison Visiting Professor Chair on First Amendment Issues at Columbia University—never intended it to. You wouldn't know this, however, from listening to the First Amendment fundamentalists piping up from Washington to Silicon Valley.

In this case, the competing social and constitutional demand is the control of hate speech in the interests of social cohesion, without which the very idea of a nation is impossible. Look at the sectarian bloodbath that is the Middle East. Or look at the tensions in China, Myanmar, Ukraine, Nigeria, the Balkans, and elsewhere. Nothing guarantees that different peoples can live together, or that nations will remain as we know them.

The United States is the ultimate multi-ethnic, multi-sectarian society. It has sinned mightily against slaves and immigrants, but has managed to hold itself together through imposition by a civil war, an evolving sense of morality, and yes, political correctness in how we treat each other. Laws followed along.

I do not know if American courts would find much of what Charlie Hebdo does to be hate speech unprotected by the Constitution, but I know—hope?—that most Americans would. It is one thing to lampoon popes, imams, rabbis and other temporal religious leaders of this world; it is quite another to make fun, in often nasty ways, of their prophets and gods. The NPR editors were right not to reprint any of the images.

Whatever you may think of the decision by NPR and other news organizations to keep those images under wraps out of deference to Muslim sensibilities, the decision was theirs to make. Schumacher-Matos is suggesting it should not have been, because those cartoons qualify as "hate speech unprotected by the Constitution." Here is something that Schumacher-Matos, who grew up in the United States, has worked as a journalist here for more than three decades, and has lectured on the First Amendment, really ought to know: There is no such thing as "hate speech unprotected by the Constitution."

Schumacher-Matos is right that certain categories of speech, including fraud, defamation, and obscenity, fall outside the protection of the First Amendment as it has been interpreted by the Supreme Court. But "hate speech," however defined, is not one of those categories. Hence it is bizarre to speculate about whether federal courts would uphold a ban on "much of what Charlie Hebdo does." They would not. Contrary to what Schumacher-Matos seems to think, freedom of speech enjoys greater protection in the United States than it does in France, so if French law tolerates Charlie Hebdo, there is no question that U.S. law would as well.

To some extent, Schumacher-Matos is conflating several different arguments: whether NPR and other news outlets should run images that some might consider to be "hate speech," whether "hate speech" should be legally tolerated, and whether it is in fact legally tolerated in the United States. There is plenty of room for disagreement on those first two points, but Schumacher-Matos is plainly wrong about the last one.