How will Congress respond to marijuana legalization in the nation's capital?

Jacob Sullum | From the February 2015 issue 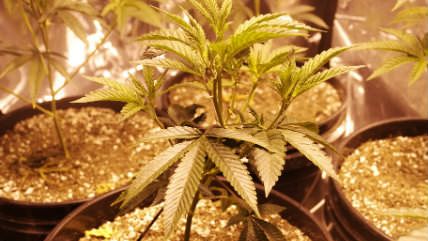 Of the three jurisdictions where voters approved marijuana legalization in November, Washington, D.C., is the smallest but the most symbolically potent. The prospect of legal marijuana in the nation's capital dramatically signals the ongoing collapse of the 78-year-old ban on a much-maligned plant.

The passage of Initiative 71, which voters backed by a 2-to-1 margin, presents a challenge to the Republicans who now control both houses of Congress. Will they respect democracy and local control, or will they insist that Washingtonians toe a prohibitionist line that is steadily disappearing?

Initiative 71 allows adults 21 or older to possess two ounces or less of marijuana, grow up to six plants at home, and transfer up to an ounce at a time to other adults "without remuneration." It does not authorize commercial production and distribution, but the D.C. Council is considering legislation that would. "I see no reason why we wouldn't follow a regime similar to how we regulate and tax alcohol," incoming Mayor Muriel Bowser said after the election.

The initiative does not take effect until after D.C. Council Chairman Phil Mendelson submits it to Congress for review. Congress then has 30 days to pass a joint resolution overriding the initiative.

Congress also can try to stop legalization by barring the D.C. Council from spending money to implement it. For more than a decade, legislators used that technique to block a medical marijuana initiative that voters approved in 1998.

Rep. Andy Harris (R-Md.), who unsuccessfully tried to prevent the D.C. Council from decriminalizing marijuana possession last summer, said he will "consider using all resources available to a member of Congress" to stop legalization. He might have more luck this time, since his earlier amendment passed the House but not the Senate, which now has a Republican majority.

Then again, the House last May approved an amendment introduced by Rep. Dana Rohrabacher (R-Calif.) that was aimed at stopping the federal government from undermining medical marijuana laws. The amendment, which attracted votes from 49 Republicans in addition to 170 Democrats, explicitly applied to D.C. as well as the 23 states that let patients use marijuana for symptom relief.

Sen. Rand Paul (R-Ky.), the new chairman of a committee that oversees the District, believes Congress should respect the will of the voters who approved Initiative 71. "I think there should be a certain amount of discretion for both states and territories and the District," Paul told reporters on Election Day. "I'm not for having the federal government get involved."

The D.C. Cannabis Campaign, which backed Initiative 71, hopes that even Republicans who still associate marijuana with the 1960s counterculture will see the merits of local autonomy. "What we want is for Phil Mendelson to transfer the initiative when the new Congress is seated," says Nikolas Schiller, the campaign's director of communications. "We believe that a new Republican Congress will not interfere with something that deals solely with personal liberties."

Principles aside, there are political reasons for Republicans to avoid defining themselves as pot prohibitionists. Several recent polls indicate most Americans favor legalization, and support is especially strong among younger voters. A 2013 Gallup survey found that retirees were the only age group in which most people still supported prohibition.

"With marijuana legal in the federal government's backyard," says Tom Angell of the anti-prohibitionist group Marijuana Majority, "it's going to be increasingly difficult for national politicians to continue ignoring the growing majority of voters who want to end prohibition. I've been saying for a while that 2016 presidential candidates need to start courting the cannabis constituency, and now the road to the White House quite literally travels through legal marijuana territory."