In the Era of High-Tech Law Enforcement, Who Will Keep Our Privacy Safe? 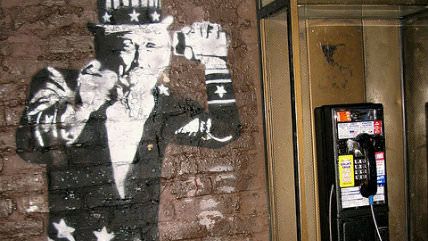 While the Western world was watching and grieving over the slaughter in Paris last week, and my colleagues in the media were fomenting a meaningless debate about whether President Obama should have gone to Paris to participate in a televised parade, the feds took advantage of that diversion to reveal even more incursions into our liberties than we had known about.

We already knew that the NSA, our 60,000 domestic spies, has captured and retained the contents of nearly all emails, text messages, telephone calls, bank statements, utility bills, and credit card bills of all Americans since 2009. We already knew that Obama has used CIA drones to kill Americans overseas and claims that he somehow can do so legally and secretly notwithstanding the express prohibitions in the Constitution. We already knew that President George W. Bush authorized the illegal torture of a hundred-plus people, about 20 percent by "mistake," and now we know that because he refuses to prosecute the torturers, Obama is as culpable for the torture as Bush is.

Last week, however, the Department of Justice revealed that since the 1990s, the Drug Enforcement Administration (DEA), whose job is to interdict controlled dangerous substances before they enter our borders and to do so consistent with the Constitution, has been monitoring the phone calls of selected Americans. Prior to 2001, the DEA intimidated, coerced, and bribed telecom providers into making their telephone lines available to its agents. Since 2001, it has no doubt taken advantage of the provisions of the so-called Patriot Act that permit federal agents to write their own search warrants to custodians of records, in direct contravention of the Constitution, which requires warrants from judges.

Last week, the Government Communications Headquarters, the British equivalent of the NSA, known as GCHQ, acknowledged that it has been reading the domestic emails of U.S. journalists since 2008. This can only be done (a) by stealth illegally, or (b) if the NSA has given this data illegally to the GCHQ, or (c) on the odd chance that an American domestic email or cellphone call has been routed through Canada or Britain. The GCHQ boasted of its ability to download 70,000 American emails in 10 minutes! Did you hear Obama condemn this?

As if all this were not enough to make one ask what is going on with our privacy, also last week, former federal agents revealed that more than 50 American law enforcement agencies, including the FBI and the U.S. Marshals Service, possess a new handheld radar device that sends sound waves through walls and receives back images on a screen of persons on the other side of the walls.

This permits cops on the street to view an image of you in the privacy of your home without your knowledge or consent and without a search warrant. For the past 13 years, the Supreme Court has refused to permit evidence from similar heat-seeking devices to be used in criminal prosecutions, and the cops have reacted by using a more high-tech version, ostensibly to see whether "anyone is home."

None of these flagrant violations of privacy, dignity, and basic American constitutional values was enacted by a majority vote of any representative body of lawmakers—and yet none has been stopped by those lawmakers. That's because we have a deep state system in American government, whereby certain law enforcement, military, intelligence, and diplomatic personnel can do as they wish, no matter which party controls the legislative and executive branches and in hair-splitting defiance of the courts.

That hair-splitting defiance argues that the Fourth Amendment's guarantee of privacy in the "persons, houses, papers and effects" of all in America only pertains to criminal prosecutions; thus, the government, this argument goes, can invade all the privacy it wants so long as it is for some other— non-criminal—purpose. Supreme Court decisions recognizing privacy as a personal natural right, as well as American constitutional history (the Fourth Amendment was written largely in reaction to British soldiers invading privacy by looking for items in the colonists' homes to tax), profoundly reject that argument.

How does the government get away with this? If you peered into your neighbor's bedroom with a high-tech device, you'd be prosecuted or sued. Yet when the government does this, most folks are supine enough to be grateful for the safety it produces. That's what Big Brother wants you to believe. What safety? Who will keep us safe from the government? Who will keep our personal liberties safe? What representative government splits hairs in order to defy the Constitution, rather than complying with its oath to protect it?

In effect, the government argues that it cannot keep us safe unless it violates the rights of the known innocent. If you buy that argument and surrender your own privacy, good luck—but don't try to surrender anyone else's. Freedom is natural and personal and cannot be surrendered by others. If you think the present federal government will keep you safe because you let it take your freedoms, what will protect you from a future federal government when all your freedoms have been surrendered?