The change leaves untouched the vast majority of loot that state and local agencies get from federal asset grabs. 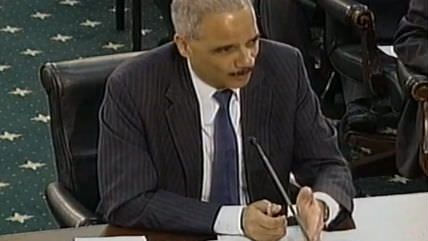 This morning I noted that the impact of the forfeiture reform announced by Attorney General Eric Holder last week will be limited by his exception for state and local seizures that result from investigations assisted by or coordinated with federal authorities. I quoted Eapen Thampy, executive director of Americans for Forfeiture Reform, who argues that "the exception swallows the rule." The Justice Department's own numbers suggest that is pretty close to the truth.

Holder's order applies only to "adoption," which happens when a state or local agency seizes property on its own and then asks the Justice Department to pursue forfeiture under federal law. "Over the last six years," the DOJ says in the press release announcing Holder's new policy, "adoptions accounted for roughly three percent of the value of forfeitures in the Department of Justice Asset Forfeiture Program." By comparison, the program's reports to Congress indicate that "equitable sharing" payments to state and local agencies accounted for about 22 percent of total deposits during those six years. That means adoptions, which the DOJ says represented about 3 percent of deposits, accounted for less than 14 percent of equitable sharing. In other words, something like 86 percent of the loot that state and local law enforcement agencies receive through federal forfeitures will be unaffected by Holder's new policy.

That is not the impression left by The Washington Post, which broke this story on Friday. "Attorney General Eric H. Holder Jr. on Friday barred local and state police from using federal law to seize cash, cars and other property without warrants or criminal charges," the Post reported, saying the new policy "would eliminate virtually all cash and vehicle seizures made by local and state police from the [equitable sharing] program." The Post did note, deep in the story, that Holder said equitable sharing would continue in cases "where local and federal authorities are collaborating." But it said "most of the money and property taken under Equitable Sharing since 2008…was not seized in collaboration with federal authorities."

That contradicts the Justice Department's numbers, which indicate that the vast majority of equitable sharing comes not from adoption but from "collaboration" of some sort, even if it is limited to federal support for multijurisdictional task forces. A 2012 report from the Government Accountability Office reinforces that point, noting that "adoptions made up about 17 percent of all equitable sharing payments" in 2010.

Because the significance of eliminating most adoptions (but not most equitable sharing, let alone most federal forfeitures) was not immediately obvious, other news outlets followed the Post's overenthusiastic lead. In a story headlined "Justice Ends 'Asset Forfeiture' Program," The Hill reported:

The Justice Department announced on Friday that most police departments could not use federal law to seize property from individuals when they have no reason to believe a crime has been committed.

Attorney General Eric Holder said in an order that the department would, in most cases, no longer run a controversial "asset forfeiture" program.

That is not true, since the vast majority of federal forfeiture cases that benefit state and local agencies do not involve adoption.

Time reported that Holder had said "state and local officials would no longer be allowed to use federal law to seize private property such as cash or cars without evidence that a crime had occurred." Boing Boing likewise claimed Holder "has ordered police departments to cease the practice of civil forfeiture (basically, stealing stuff and selling it) unless the forfeiture is related to a specific warrant or charge." Even the Drug Policy Alliance praised Holder for "a new policy prohibiting federal agencies from accepting civil asset forfeiture assets seized by state and local law enforcement agencies unless the owner is convicted of a crime."

I initially got caught up in the excitement too. But the closer I looked, the less there was to the new policy. I do not mean to imply that it won't accomplish anything worthwhile. Even eliminating 14 percent of the Equitable Sharing Program is a welcome step, although 100 percent (as recommended by four members of Congress, including three conservative Republicans, in a recent letter to Holder) would have been better. Holder's change surely will prevent some injustices. But it is important to recognize that he is talking about a small piece of equitable sharing and an even smaller piece of all federal forfeitures, which of course do not include forfeitures carried out under state laws (over which Holder has no authority). More-ambitious reform will require action by Congress and by state legislators.