"An Alt-Weekly For the Upper Crust": Q/A with New York Observer's Ken Kurson 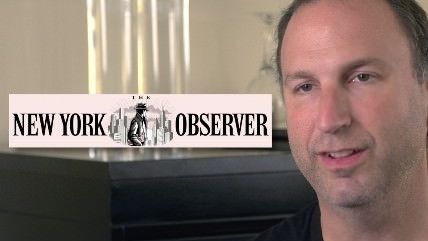 Original release date was December 30, 2014 and the original writeup is below.

"If you're going to buy into the idea of capitalism, then you have to believe in growth," says Ken Kurson, editor in chief of the New York Observer, a weekly newspaper described by Reason TV's Nick Gillespie as "one of the most vibrant and exciting in the country." Founded in 1987, the Observer has served as a launching pad for journalists as diverse as Sex & the City author Candance Bushnell, Buzzfeed's Ben Smith, and MSNBC's Steve Kornacki.

In an interview with Gillespie, Kurson says the Observer "occupies a different space" than most of its competitors because it's a "pro-business alt-weekly for the upper crust."

Kurson's route to the Observer, which he joined a year ago, was a circuitous one that included dropping out of college, playing in the rock band Green, and starting a financial-advice magazine for young adults (also called Green). A Chicago native, Kurson served as a staffer for former Mayor Rudy Giuliani and co-authored the bookLeadership before running unsuccessfully for Congress in New Jersey and working as a political consultant.

An unreserved booster of New York's manic dynamism and envelope-pushing energy, Kurson defends Giuliani and Mike Bloomberg's time in office, saying that despite nanny-state excesses each helped create the sort of economic growth that makes everything else possible. Critics, he says, "wanted all of the good things but then they wanted to wave flags when they didn't like this or that individual decision." Whenever the Big Apple's mayor or government gets too crazy, he avers, they get reeled back in by citizens.

Despite his Republican leanings, Kurson is bullish on Mayor Bill de Blasio, though he worries that the former public advocate will go too far in appeasing the most left-leaning of his supporters and choke off economic vitality.

This interview was recorded July 24, 2014, shortly after the arrest and death of Eric Garner at the hands of the New York Police Department had hit the news.