Vote Libertarian to Stop the Next 'Bipartisan' Disaster

The failed drug war? Mass surveillance? $17 trillion debt? All that and more, thanks to Republicans and Democrats working together. 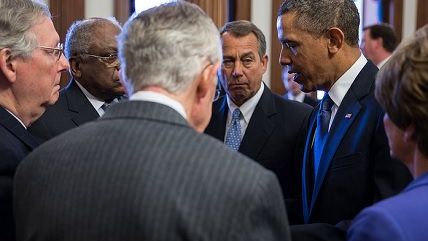 This article is part of a series on the libertarian vote in the 2014 midterm election. Read the alternative perspectives from other parties here and here.

Pick a problem. Any problem. There's a pretty good chance both major parties—Republicans and Democrats—share responsibility for it.

The mass surveillance state? Thank bipartisanship. The so-called "Patriot" Act infamously sailed through the U.S. Senate in 2001 with only one dissenting vote. As Senate Minority Leader, Democrat Harry Reid (NV) bragged about "killing" the bill in a speech to party activists in 2005, though all he really did was temporarily delay reauthorization. Just six years later, with his party in control of the White House and the Senate, Reid let his true colors show when he accused Republican Sen. Rand Paul (Ky.) of endangering national security for seeking to have a debate about the bill.

Our unconstitutional, interventionist foreign policy? Thank both parties. Barack Obama is now the fourth consecutive president—two from each party—to initiate new bombing campaigns in Iraq. Back when Republicans were in power, then-Senator Barack Obama said, "The President does not have power under the Constitution to unilaterally authorize a military attack in a situation that does not involve stopping an actual or imminent threat to the nation." His bombing campaigns against Libya and ISIS tell a different story.

The failed drug war? The highest incarceration rate in the world? Militarized police? Abusive asset-forfeiture regimes? Republicans and Democrats have staunchly supported all of it.

Rampant corporate welfare? In 2008, when Republicans were the ones supporting the Export-Import Bank, candidate Barack Obama called it little more than corporate cronyism, but in 2014, it was Democrats lining up to support it. Virginia's Democratic Senators Mark Warner and Tim Kaine introduced the reauthorization bill, and President Obama signed it. That's just one issue among many. Cronyism is rampant in both parties, and its choking off our economic vitality.

Even the Defense of Marriage Act and Don't Ask Don't Tell were bipartisan schemes when passed.

George Carlin was right: "Bipartisanship usually means some larger-than-usual deception is being carried out."

Luckily, there is a different option that is gaining more and more support every year. The Libertarian Party has been on the right side of issue after issue for forty years, and that's for one simple reason—a principled commitment to America's greatest political value: freedom. Candidates for elected office under the Libertarian Party banner are running for simple reason: We believe both major parties are broken, neither will protect ALL your liberties, and voters deserve a better option.

That's especially true for nearly a quarter of the American public that leans libertarian. That's one-fourth of the population without a natural home in either major party. They can find a home in the Libertarian Party.

The simplest reason, then, for a libertarian to vote Libertarian is to vote according to their conscience. People like Adrian Wyllie (Governor in Florida), Sean Haugh (U.S. Senate in North Carolina), John Buckley (U.S. Senate in West Virginia), Andrew Hunt (Governor in Georgia), and the late Douglas Butzier decided to run as Libertarians for the right reasons—not for self-aggrandizement or personal gain but to spread our message of personal and economic liberty and to give voters something to be proud of voting FOR.

This time of year, Republican and Democratic candidates and their media apologists will court the libertarian vote—which, make no mistake, is a swing vote—by trying to get libertarians to vote against their conscience. They spread myths like "You must vote for the lesser of the two evils" or "Voting Libertarian is a wasted vote." Perhaps the most pervasive, and most duplicitous, is the notion that Libertarians "spoil" elections and "steal" votes from the other candidates.

I've had to fight that argument for over a year, first in my history-making campaign for Governor of Virginia last year, and now in my campaign for U.S. Senate. Though I've heard it from both sides on the campaign trail, it's more common in Virginia to hear it from Republicans, who continue to lose statewide elections and refuse to admit they've made themselves unpalatable to the electorate through hypocrisy on economic matters and stridently illiberal social policies.

But it's not true—we aren't "spoilers," even if you buy into the concept. Even conservative analysts who have actually looked at the results concluded that I did not "spoil" last year's race. A recent University of Mary Washington poll found that the "second choice" for Virginians who support me this year splits very evenly between those who support Democrat Mark Warner, those who support Republican Ed Gillespie, and and those who wouldn't vote at all. Libertarians like me actually increase turnout among independents and libertarians, and we provide an outlet for both disaffected progressives and conservatives. Even if we did "spoil" elections, those votes are not "stolen." Any Republican or Democrat who loses simply did not earn enough votes.

Oddly enough, it goes both ways. Just one state south of Virginia, Democrats are the ones worried the Libertarian will "spoil" the race, in part because of independent expenditures highlighting his positions on marijuana legalization and foreign policy.

Republicans and Democrats will cynically trot out whatever argument suits them best in any particular election. Vote Libertarian to reject their cynical, partisan games—and vote for both sides of the libertarian equation.

Voting Libertarian will also help grow our party and movement. The media will take notice if Libertarians pull in record-breaking numbers. Pundits already believe our country is having a "libertarian moment." The two major parties will only seek to take advantage of that moment for short-term political gain. Neither can be trusted to rein in the debt, the surveillance state, or America's foreign policy adventurism.

But even without winning, we are changing the dialogue and putting issues into the forefront that were previously ignored. In both my statewide campaigns, I've talked extensively about asset forfeiture reform. I'm pleased to see a Republican in the Virginia General Assembly intends to introduce reform legislation. By volunteering, contributing to, and voting for Libertarians on November 4, you will help bring attention to more issues like this.

Depending on your state, a vote for the Libertarian is also an investment in improving state and local politics via more open and competitive elections. If I break 10 percent, the Libertarian Party of Virginia will gain major-party status here. That means Libertarian candidates in upcoming cycles won't have to face huge obstacles and unequal treatment just to get on the ballot.

That's important because Virginia elections are notoriously uncompetitive. Every two years, nearly half of Virginia House of Delegates races go unopposed. Libertarians could shake up the state in two-way races. Both establishment parties in the Old Dominion participate in a cronyist political culture. In recent months, both have been caught offering a state senator competing enticements to convince him to resign or stay in his post and affect the partisan balance. Voting Libertarian sends a message against this politics-as-usual corruption that plagues both parties.

Our success at the ballot box will also spread the libertarian message to those looking for something different, especially younger voters. Reason-Rupe's July poll found that a majority of millennial voters are willing to support a candidate who is both socially liberal and fiscally conservative.

My campaigns have helped demonstrate, despite having limited resources and being excluded from the debates, that we can start winning them over. After my success with millennials last year, both my Democrat and Republican opponents have scrambled for college students' votes, with varying degrees of success. A just-published Christopher Newport University poll of voters between the ages of 18 and 35 found that 24 percent support me versus only 11 percent for Ed Gillespie, the Bush-era Republican operative and corporate lobbyist.

47 percent in the Christopher Newport University poll said they support Democrat Mark Warner, but the Reason-Rupe poll also strongly suggests that younger voters are reflexively leaning Democrat not out of any real partisan or ideological commitment, but simply because they dislike Republicans more. Imagine what would happen if Warner had actually accepted the University of Mary Washington invitation for a three-candidate debate, and I could have exposed to college students his disastrous record in support of the surveillance state and against reforms to better protect our civil liberties.

Besides libertarians and millennials, there are independents and moderates who simply believe Washington is broken, and there are those who are so jaded by politics they don't pay much attention anymore. We want to give all of them a better option. By voting Libertarian, YOU can help show them that they have a better option.

The two major parties got us into the messes we face. Libertarians can get us out of it. Wherever you are, vote Libertarian.

Robert Sarvis is an attorney, businessman, software developer, and politician running for U.S. Senate in Virginia.