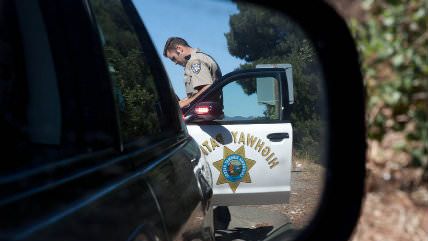 What do California Highway Patrol (CHP) officers and nasty Internet trolls have in common? Like the hackers who stole and released nude celebrity pics from iCloud, these Cali cops think they have a right to view private images off women's phones and the law be damned. A team of CHP officers is now under investigation for a years-long "game" in which they stole and traded private photos from the phones of women they arrested.

None of the officers have been charged so far, but last week CHP Officer Sean Harrington, 35, confessed to stealing nude photos of a woman he arrested on DUI charges and admitted that he and other CHP officers have been swapping such images for years. According to the Contra Costa Times, the practice "stretches from (CHP's) Los Angeles office" to Harrington's office up in Dublin, California, near San Francisco. From the Times:

The five-year CHP veteran called it a "game" among officers, according to an Oct. 14 search warrant affidavit. Harrington told investigators he had done the same thing to female arrestees a "half dozen times in the last several years," according to the court records, which included leering text messages between Harrington and his Dublin CHP colleague, Officer Robert Hazelwood.

(…) In the search warrant affidavit, senior Contra Costa district attorney inspector Darryl Holcombe wrote that he found probable cause to show both CHP officers Harrington and Hazelwood and others engaged in a "scheme to unlawfully access the cell phone of female arrestees by intentionally gaining access to their cell phone and without their knowledge, stealing and retaining nude or partially clothed photographs of them." That behavior constitutes felony computer theft, the affidavit said.

Not only did the cops illegally access women's photos, they then proceeded to be judgmental dicks about them. Here's a sample text conversation between Harrington and Hazelwood:

Luckily, Officer Harrington's intelligence is also "like a 5 or 6 at best": the ruse was discovered when the last woman whose photos he stole noticed that the photos had been sent to an unknown number. Harrington had deleted evidence they had been sent from the woman's iPhone, but the phone was synced to her iPad as well.

CHP is of course trying to paint the situation as an isolated incident, but Rick Madsen, the lawyer representing the woman who discovered the activity, balked at this. "This particular instance was only discovered by my client by chance—and it's a reasonable speculation to imagine how often it has occurred undetected," Madsen said a statement. "Who knows how many officers have participated in this so-called 'game,' or how many more women have been victimized?"

As SearchSecurity editor Rob Wright tweeted this morning, yet another reason for phone encryption.