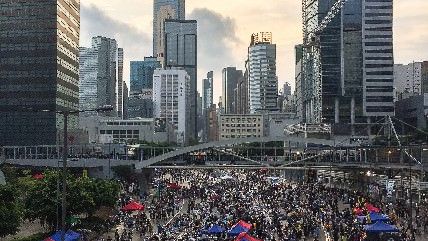 In The Guardian, Martin Jacques makes the case that the greater context for the upheaval in Hong Kong is more complicated than it appears to many Westerners, but overplays his hand when he dismisses the pro-democracy complaints against the Chinese government as being essentially a red herring.

A prominent intellectual and noted expert on Chinese affairs, Jacques lived in Hong Kong for years and even wrote a book called When China Rules the World: The End of the Western World and the Birth of a New Global Order.

He correctly bristles at the misconception that Hong Kong enjoyed democracy under British rule and that China is revoking the privilege of universal suffrage. Indeed, the British never allowed citizens of Hong Kong to elect its governors, which were appointed from "6,000 miles away in London." Why he finds it preferable for Beijing to select Hong Kong's leaders from 1,200 miles away is unclear.

Jacques credits the Chinese for honoring the continuation of the British traditions of "rule of law and the right to protest" since taking over sovereignty of Hong Kong in 1997, as evidenced by the current protests. But he makes no mention of the 1989 crackdown in Tiananmen Square, the subjugation of Tibet or the ethnic Uighurs, or any of the Chinese Communist Party's infamous authoritarianism.

He thinks far too much has been made of the protesters' demands that China honor its stated committment to "universal suffrage" and to allow Hongkongers to directly elect their chief executive. Rather, he suspects the protesters are motivated by economic jealousy of mainlaind Chinese, who's fortunes have soared in the past two decades while theirs have stagnated:

Herein lies a fundamental reason for the present unrest: the growing sense of dislocation among a section of Hong Kong's population. During the 20 years or so prior to the handover, the territory enjoyed its golden era – not because of the British but because of the Chinese. In 1978 Deng Xiaoping embarked on his reform programme, and China began to grow rapidly. It was still, however, a relatively closed society. Hong Kong was the beneficiary – it became the entry point to China, and as a result attracted scores of multinational companies and banks that wanted to gain access to the Chinese market. Hong Kong got rich because of China. It also fed an attitude of hubris and arrogance. The Hong Kong Chinese came to enjoy a much higher standard of living than the mainlanders. They looked down on the latter as poor, ignorant and uncouth peasants, as greatly their inferior. They preferred – up to a point – to identify with westerners rather than mainlanders, not because of democracy (the British had never allowed them any) but primarily because of money and the status that went with it.

Much has changed since 1997. The Chinese economy has grown many times, the standard of living of the Chinese likewise…Understandably, many Hong Kong Chinese are struggling to come to terms with these new realities. They are experiencing a crisis of identity and a sense of displacement. They know their future is inextricably bound up with China but that is very different from embracing the fact. Yet there is no alternative: China is the future of Hong Kong.

Jacques is entitled to a worldview based on his own experience, research and analysis. But it takes some bold projection to assume that a 17-year-old protester risking life and limb against riot police isn't really interested in participating in democracy but it just acting out, frustrated that mainland Chinese are more prosperous than they were before he was born.