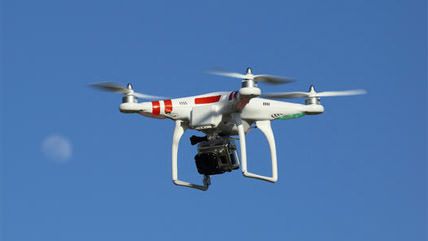 The express mail service DHL is scheduled to use a drone, dubbed the "parcelcopter," to deliver some packages of medicine today. If the company does so successfully, it will be a step ahead of giants like Amazon and Google, which have generated much buzz around their projected drone delivery plans.

Unfortunately, the U.S. is out of the loop in this exciting new field. DHL's test is taking place in Germany, transporting the goods to a remote island called Juist.

DHL said that it had worked with the German air-traffic agency and the country's Ministry of Transport and Digital Infrastructure to create a restricted flight zone for the company's drone project. The aircraft will hover 100 feet off the ground and reach speeds of up to 40 mph during the seven-mile journey from the mainland to Juist.

Amazon and Google are conducting tests, but not actual deliveries. Even though they're American-based companies, those trial runs are happening in Canada and Australia, respectively.

The Federal Aviation Administration (FAA) is weighing down the industry in The Land of the Free.

Seemingly good news in the U.S. that the FAA is now allowing half a dozen Hollywood film companies to fly drones is soured by how much the administration abuses hobbyists and small businesses. There's a growing litany of airborne operations shut down by the FAA: taco deliveries, crop dusters, wedding photographers, and even a charitable search and rescue team. I've previously highlighted that even Russia has drone pizza delivery services, something prohibited in the U.S.

But the agency isn't just playing favorites with certain sectors, it's flatout inept and shortsighted.

Even though the worldwide drone industry is projected to be worth $89 billion over the next 10 years, the administration even shut down a college program geared at educating the first wave of America's drone-related workforce.

The FAA has been issuing cease-and-desist orders, which courts have determined lack legal weight, but they're still effective at scary off potential business builders.

The agency has approved several drone testing sites throughout the U.S., but as of yesterday, they're still not telling testers what the heck they're allowed and supposed to be doing, reports Vice's Jason Koebler.

Even the Department of Transportation Inspector General has little faith in the agency. He reported in June that the FAA "is significantly behind schedule in meeting most of the [drone]-related provisions of the [2012] FAA Modernization and Reform Act." In less than a year, the FAA is supposed to have "aircraft certification requirements, standard air traffic procedures, [and] an adequate controller training program" hammered out, but they haven't made much progress yet.