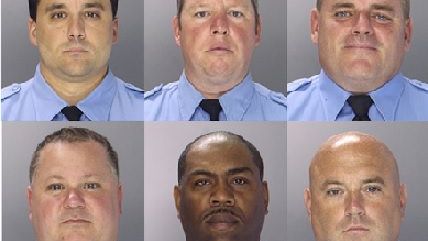 For his faults, Philadelphia's police commissioner, Charles Ramsey, has not avoided trying to fire problem cops. The problem is even though he's nominally in charge of the Philadelphia Police Department he doesn't have final say on employment decisions. Thus last week Ramsey lamented that he could not rid his force of Thomas Tolstoy, an alleged sexual predator, because neither a federal nor local investigation produced a prosecution.  "The odds are," said Ramsey, "I'm stuck with a guy who shouldn't be a cop." The statute of limitations on the allegations against Tolstoy expire later this year and he's likely to return to the streets of Philly as a cop—he's been drawing a paycheck without interruption despite three separate women accusing him of similar sexual assaults, including at least one who ended up in a hospital. Last summer a cop Ramsey fired after he was caught on tape punching a woman for no reason got his job back thanks to an arbitration hearing. Nevertheless, since 2008 Philadelphia has fired 146 police officers, 88 of whom were arrested, and 48 of whom have been convicted so far, on charges like murder, rape, and extortion.

Then there's the group of Philadelphia cops from a now defunct anti-narcotics group. Their misconduct has already forced the district attorney to throw away hundreds of drug-related cases because of tainted testimony. And they could cost city taxpayers millions due to lawsuits. Philly.com reports:

Seven Philadelphia police narcotics officers at the center of a federal corruption probe are also named in scores of civil lawsuits that add more claims of thievery, intimidation and brutality to those described in their criminal indictments, according to court records.

The potential financial impact of these suits, along with any others that may be filed, could expose the City of Philadelphia to millions of dollars in damages or settlements.

The Philadelphia Police Department's inability to respond effectively to misconduct, in large part due to the strength of the Fraternal Order of Police, has now exposed it taxpayers to potentially millions of dollars in liability for the actions of officers whose jobs were treated as rights. Only one of the seven officers is no longer with the department—he pleaded guilty to charges of corruption and turned state's evidence. The other six were "suspended with intent to dismiss." Ramsey can't just fire an officer, even if that officer and his colleagues are under federal investigation for serious crimes. It's a similar situation for Tolstoy. If the alleged sexual predator acts again and victimizes another woman, can the city claim it's not liable? It won't be as easy for them to get out of as it is for unions, which are rarely held liable for actions that keep problem cops on the street.

The idea that "due process" should apply to the employment status of government agents authorized to use violence against us is horrific.