Happy Fourth! …Unless You Live in a State With Firework Bans 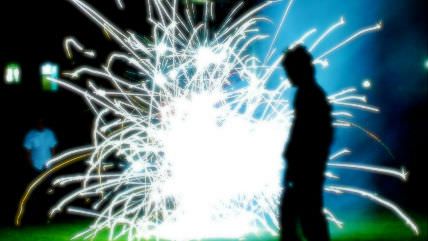 Tomorrow's the big day in the U.S. of A, and what better way to celebrate our independence than with some real firepower? That's probably what one unnamed, entrepreneurial 77-year-old Cleveland resident thought. Unfortunately for him, he lives in a state that essentially bans the detonation of anything stronger than a sparkler, and now he may be facing felony charges.

A citizen tipped off police that the Cleveland man … was illegally selling fireworks. Detectives bought two boxes of assorted fireworks for $100 from the Cleveland man. After the purchase, the man told the undercover officers he could get them bigger fireworks, [Second District Commander Thomas] Stacho said.

Detectives followed him to the 8700 block of Pleasant Valley Road in Parma, Stacho said. He opened the garage to what looked like a store, shelves lined with hundreds of fireworks, ranging from small firecrackers and sparklers to professional grade explosives and H-100 firecrackers. …

Police and prosecutors are taking the cases against the [77-year-old and another man] to a Cuyahoga County Grand Jury and are seeking a felony indictment. The men have not been arrested or charged.

His loot added up to about $100,000 worth of fun. Now the cops will have the pleasure of "detonat[ing] the confiscated fireworks in a large hole in an undisclosed location."

While Cleveland police officers like Stacho pat themselves on the back for staging "one of the largest fireworks seizures any one of us are aware of or remember in the city," it's worth reflecting on the situation's absurdity: a senior citizen could face prison time for conducting business that less than two hours' drive away across the Pennsylvania border wouldn't warrant a written citation (albeit, with the proper licensing).

Ohioans aren't the only ones burdened by such prohibitions. The Washington Post highlights the fact that "roughly 1 in 9 Americans lives in a state that bans all consumer fireworks." Those would be Delaware, Massachusetts, New Jersey and New York. Additionally, "five states — Illinois, Iowa, Maine, Ohio and Vermont — allow only sparklers and/or novelty fireworks. And Arizona allows only novelty fireworks."

I'd say it's unfortunate for residents of those states, but having participated in many such fireworks displays, I know it's all the more titillating to celebrate Independence Day in direct defiance of bad laws.