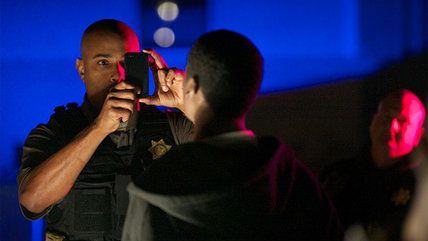 In January, New York Mayor Bill de Blasio announced that the city had reached a settlement agreement with the lawyers who challenged the New York Police Department's stop-and-frisk program in federal court. The agreement leaves in place U.S. District Judge Shira Scheindlin's August 2013 ruling that the program was unconstitutional, and it preserves the reforms she ordered, including a federal monitor and experimental use of body cameras to record police encounters.

Those changes had been blocked by an appeal that De Blasio promised to drop if elected mayor. "We're here today to turn the page on one of the most divisive problems in our city," De Blasio said at a January press conference. "We believe in ending the overuse of stop-and-frisk that has unfairly targeted young African-American and Latino men."

Under the settlement, the NYPD will continue to stop and frisk people, which the Supreme Court has said is permitted under the Fourth Amendment when police reasonably suspect someone is involved in criminal activity and (for the pat-down) that he is armed. Statistics at the center of the case Scheindlin heard indicate that street stops by New York cops, which overwhelmingly targeted young black and Hispanic men, frequently failed this test. Between January 2004 and June 2012, when the NYPD made 4.4 million stops, only 12 percent of the targets were arrested or issued a summons. Even more striking, although police are supposed to frisk a subject only if they reasonably believe he is armed, 52 percent of these encounters included pat-downs, only 1.5 percent of which discovered a weapon. Even when officers reached into subjects' clothing after feeling what they claimed to think was a weapon, they were right only 9 percent of the time.

Tellingly, former Mayor Michael Bloomberg's main defense of the stop-and-frisk program was that it worked by deterring young men from carrying guns, not that it complied with the requirements of the Fourth Amendment. But even before Scheindlin's ruling, the NYPD was dialing back the program. The number of stop-and-frisk encounters, which grew from about 100,000 in Bloomberg's first year as mayor to almost 700,000 in 2011, fell to about 530,000 in 2012. In the first three quarters of 2013, there were 179,000 stops.