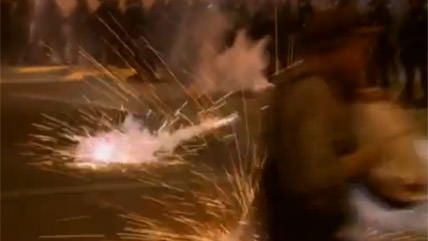 Hundreds of people took to the streets of Albuquerque, New Mexico, yesterday to protest police brutality. The police responded by blocking the activists' paths and firing tear gas canisters at them.

The demonstration, which began in the early afternoon outside the Albuquerque Police Department (APD) headquarters, came as a response to the department's frequent use of force.

"There has been excessive force lately—in the last couple of years — and I think something has to be done," one participant told a local news station. "The new police chief is not doing his job. He spoke wrongly two weeks ago by justifying it, before everything was out there."

The Associated Press notes that the APD has been involved in 37 shootings since 2010 and is currently under federal investigation. In one recent incident, officers shot a homeless man for illegally camping on public grounds.

By 5 p.m., an estimated 300 protesters were marching through the streets and riot police armed with batons and wearing gas masks (and some riding riot gear-wearing horses) arrived to disperse the crowds. The APD declared the gathering an "unlawful assembly," implying that the protesters intended to use violence.

However, the Albuquerque Journal writes that the situation didn't become "unruly" until 8 p.m., after New Mexico State Police arrived. The Journal reported at the time:

A line of riot police have blocked about 200 protesters' passage west on Central Avenue near Girard, and protesters have thrown eggs and water bottles at APD vehicles.

About 75 protesters are confronting police in front of the line of officers, which includes those mounted on horses and empty prisoner-transport vans.

"We want to ensure you have the right to protest in a lawful manner," police can be heard telling the protesters.

The nearby APD Monte Vista substation was also vandalized with spray-painted expletives.

Soon after, the Bernalillo County SWAT Team, operating armored vehicles, joined in and officers arrested at least one protester.

After 9 p.m., Mayor Richard Berry warned that "individuals who weren't connected necessarily with the original protest [had] taken it far beyond a normal protest," when protesters reportedly injured one officer and broke a patrol car window. So, law enforcement began firing tear gas into crowds and according to Associated Press, "Bernalillo County sheriff's deputies charg[ed] at the protesters."

People regrouped two hours later, and the police fired more tear gas at them. One attendee captured an incident on camera.

State Sen. Joe Cervantes (D) wrote on Twitter that "student housing [was] impacted" at the University of New Mexico when "tear gas has drifted inside dorms"

The protests petered out late in the night.