Brian Doherty | From the April 2014 issue 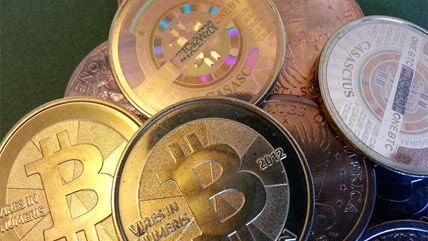 Mike Caldwell was an early enthusiast for the digital currency Bitcoin. He started an online business called Casascius, which offered Bitcoin holders a physical token printed with the digital key for their holdings of the cryptocurrency. Mostly used as a memento or conversation-starter, Caldwell's tokens gave physical form to the ethereal conceptual currency.

These keepsakes might seem harmless. But to the federal government, which has become increasingly alarmed about the rise of online alternative currencies, turning digital money into a physical token could make you subject to a wide and far-reaching set of regulations.

In late November, Caldwell got a letter from the Financial Crimes Enforcement Network saying his business fell under their purview. "They considered my activity to be money transmitting," Caldwell told Wired, and thus subject to complicated regulations. Caldwell felt obligated to pursue counsel; his legal fees have already cost him $5,000.

Caldwell at first stopped making the tokens. In January, he decided it would not be risking legal reprisal if he sold tokens that didn't actually have a real Bitcoin digital key printed on them. Unlike the "real" ones, the new ones would have quotation marks around the denomination.