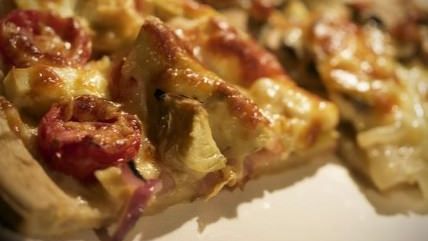 Americans eat an awful lot of pizza, according to a February report from the U.S. Department of Agriculture on pizza consumption from 2007–2010.

The findings can be summarized thusly: On a given day, about 13 percent of Americans eat pizza. Especially teenage boys. And white people. And kids, at lunch. Pizza has a lot of calories. And sodium.

The report doesn't offer any thoughts about whether this is a good thing. That may be because the U.S. government's official position is that people should eat more pizza—and also less pizza.

As I've noted before, the Agriculture Department subsidizes Dairy Management, an industry group which promotes cheese consumption in all its glorious forms, but especially in the form of Domino's. While the report doesn't say so, I'd be willing to bet the discrepancy between adults—who eat pizza for dinner—and kids—who are much more likely to eat it at lunch—is explained by the federal school lunch program. (Friday is pizza day, y'all!) It also subsidies the Center for Nutrition Policy and Promotion, which frowns on eating pizza for lunch all the damn time and recently relegated dairy to a peripheral position in the food pyramid/plate/pentagon/whatever.

In fairness, this is just one of approximately 1 bazillion reports that the USDA churns out about the American diet. It's not like someone went out of their way to do a special pizza study; as a matter of course taxpayers foot the bill for lots of these semi-pointless data dumps that poorly duplicate the efforts of private market research.

The real crime here is this missed pie chart opportunity in the report:

A bar graph about pizza? Really?

The February USDA report also ends with a helpful definition, which clears up any confusion about what counts as an authentic pie:

Pizza: Includes all food codes defined by the What We Eat in America Food Categories (6) as 'pizza' (4- digit category number = 3602).

And this oddly ominous entry:

Pizza consumer: Any individual who reported pizza, in any amount, at least once on the intake day.

Pizza: If you see something, say something.