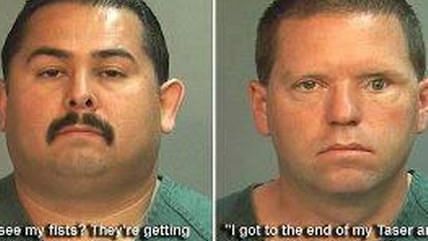 It's been more than two years since Kelly Thomas, a schizophrenic homeless man, died after a brutal beating at the hands of police officers in Fullerton, Calif. Today, after community outrage, the retirement of the city's police chief, and the recall of three Fullerton City Council members, two of the six officers involved in the incident face the music. Their criminal trial has begun.

The trial of two former California policemen charged in the beating and stun gun death of a mentally ill transient began on Monday with opening statements about the deadly confrontation that touched off protests and political upheaval in a Los Angeles suburb.

Prosecutors say the two officers, who approached Kelly Thomas to question him about reports of vandalized cars near a bus depot, turned a routine police encounter into an unnecessary and savage beating that cost the unarmed homeless man his life in what represented a flagrant abuse of authority.

Former Fullerton officer Manuel Ramos, 39, is charged with second degree murder and involuntary manslaughter in the confrontation between Fullerton police officers and 37-year-old Thomas on the night of July 5, 2011.

Jay Cicinelli, a 41-year-old ex-corporal with the Fullerton Police Department, is charged with involuntary manslaughter and use of excessive force. Both men have pleaded not guilty.

Defense attorneys were expected to argue that Thomas had a history of violence and resisted the officers' attempts to detain and question him.

ReasonTV's Paul Detrick is at the courtroom for the trial, but the judge has banned the media from live-tweeting the happenings. Below, ReasonTV shows how important citizen outrage and public recording of police officers were in trying to bring about justice in this case:

Our previous coverage of the Kelly Thomas case can be found here.