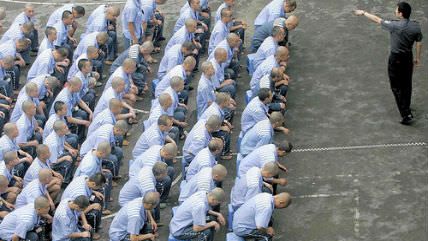 In an effort to appease human rights concerns over antiquated and inhumane forms of punishment, China's central government announced last month that it will abolish its infamous forced labor camps. The oppressive camps are not actually going away though: they are being turned into forced drug rehabilitation centers.

The announcment came after the conclusion of the Third Plenary meeting of the Communist Party, a gathering of China's top policymakers and political leaders, when the government issued a press release detailing its plans to curtail the country's human rights abuses by enacting "comprehensive reform."

The reforms include (allegedly) putting an end to forced labor camps, or the "laojiao" system, as well as the one-child policy.

The laojiao system has been the subject of intense criticism from human rights groups and Chinese citizens for decades. Established in 1957, the camps detain petty criminal offenders, drug users, and political and religious dissidents for up to four years without trial. Inmates spend their days working long hours in unsafe factory conditions. And they're widespread: In a 2009 report to a United Nations human rights forum, the Chinese government acknowledged the existence of 320 facilities nationwide holding 190,000 people.

However, according to a new report from Reuters, the camps will remain largely intact for drug users. From the report:

Many of China's re-education through labor camps, instead of being abolished in line with a ruling Communist Party announcement this month, are being turned into compulsory drug rehabilitation centers where inmates can be incarcerated for two years or more without trial.

Human rights activists and freed inmates said drug offenders were still being forced to do factory work, as has been the practice under the re-education through labor system.

New York-based Human Rights Watch estimates more than 60 percent of the 160,000 people in labor camps at the start of the year were there for drug offenses. Those people were unlikely to see any change in their treatment, it said.

"The drug detox people are doing exactly the same work," said Li, who spent 19 months in a labor camp in Kunming, the capital of southern Yunnan province.

Government websites and state media have detailed the transition, as many camps have started to change their names and re-train staff. But they describe the new policy as a form of compassionate treatment for addicts, rather than a continuation of forced labor.

The policy is part of China's escalating crackdown on illicit drug consumers.

According to The Atlantic, the influx of recreational drugs into China (a product of "more relaxed borders, increased wealth, and greater individual freedoms") has resulted in frequent record-breaking drug busts. In 2008, the government implemented an anti-drug law that severely criminalized users. Anyone caught using a classified drug, such as cocaine, heroin, or marijuana, would be labelled an "addict" in the state's official reigstry and shipped to a labor camp.

Individuals detained in some drug detention centers are routinely beaten, denied medical treatment, and forced to work up to 18 hours a day without pay. Although sentenced to "rehabilitation," they are denied access to effective drug dependency treatment and provided no opportunity to learn skills to reintegrate into the community.

Jiang Tianyong, a human rights lawyer in Beijing, told Reuters, "It's wrong to say [the announced end of forced labor camps] has no meaning, but it's too optimistic to think it will change a lot."

"This is how power in this country operates," he continued. "They can't use re-education through labor camps to control people, so they just change the name and control people."