Photo of Cuban holding a bundle of cash called "charming" 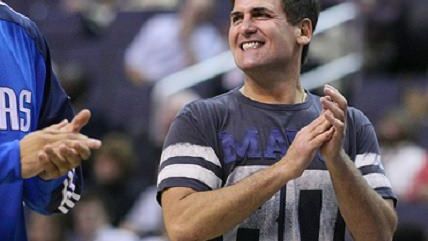 Earlier this month, a federal jury acquitted Dallas Mavericks owner Mark Cuban of charges of insider trading the Securities and Exchange Commission had been pursuing for five years. Cuban declined an offer to settle and always maintained the government's case was weak. Cuban says SEC attorneys told him it was "nothing personal" after the verdict, but he rejected the assertion that when the government goes after you it can be anything but. Cuban also criticized the SEC's practice of regulating through litigation, telling CNBC:  "It's a lawyer-driven organization. They think like prosecutors. They act like lawyers and that has to change… As long as it's lawyer driven, they'll never have confidence in the markets. They'll never have consumer confidence increase in the markets. That has to change."

Last week, he posted an e-mail exchange between the then Head of Enforcement at the SEC and two other SEC officials. The e-mail included photo attachments (pictured right), which the head of enforcement replied had made her "feel fully informed" and that the "picture with the money is particularly helpful and certainly speaks a 1,000 words (if not more)." Cuban introduced the e-mail with this comment:

Its not fun being in the government's crosshairs.  But there is comfort in knowing that the then Head of Enforcement at the SEC , Linda Thomsen (now of Davis & Polk law firm. I'm guessing her clients are proud !) went to the Nth degree to make sure she knew the smallest details of my case before moving forward !

See the blog post and the full e-mail exchange here.