Chris Christie Says It's Up to Parents to Decide How to Care for Their Kids, But He Has to Protect Them All; Conditionally Vetoes Medical Marijuana for Children Bill 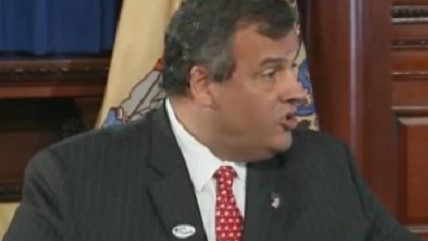 Chris Christie has conditionally vetoed a bill the legislature passed earlier this summer that would make it easier for parents to treat their sick children with medical marijuana. Thus spoke Christie:

"As I have repeatedly noted, I believe that parents, and not government regulators, are best suited to decide how to care for their children," Christie said in a statement. "Protection of our children remains my utmost concern, and my heart goes out to those children and their families who are suffering with serious illnesses. Today, I am making commonsense recommendations to this legislation to ensure sick children receive the treatment their parents prefer, while maintaining appropriate safeguards. I am calling on the Legislature to reconvene quickly and address these issues so that children in need can get the treatment they need."

The governor did permit the use of edible forms of marijuana for sick children, and lifted a restriction to three strains on authorized growers, but did not lift the requirement that a child's treatment with medical marijuana has to be approved by a pediatrician or psychiatrist in the state's medical marijuana program, the repeal of which was a main component of the most recent bill. The dad who asked Christie about the issue earlier this week was one of more than 2,200 parents who sent letters to Christie urging he sign the legislation. Up to three doctors' approvals are required if the child's physician is not in the state's medical marijuana program.