Which way's the wind blow? 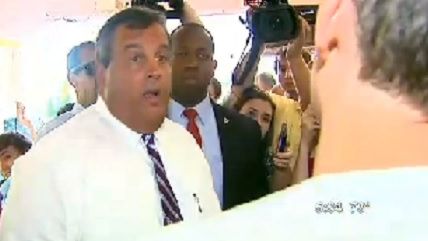 So New Jersey legalized medicinal marijuana in 2009, but implementation's been slow and stupid. It took three years, for example, for the first dispensary to open. Unsurprisingly, it's still easier to buy street drugs in New Jersey than legal marijuana, even for medical marijuana patients. This June, the state legislature passed a new law that would make it easier for sick children to access medical marijuana. It's August, and New Jersey's paternalistic governor, Chris Christie, is still mulling it over. Confronted by the parent of a child waiting for easier access to medical marijuana, Christie explained it wasn't as simple as just signing the law. From CBS New York:

"I was wondering what the holdup is. It's been like two months now," Wilson pressed the governor.

"These are complicated issues," Gov. Christie responded to Wilson.

At the end of their exchange, Christie told Wilson he'd decide in the coming days whether to sign the bill.

"I'll have a decision by Friday. I wish for the best for you, your daughter and your family and I'm going to do what I think is best for the people of the state," Christie told Wilson.

At least he didn't call it his state this time. In the three-plus years of "officially" legal medical marijuana, street prices and qualities have not substantively changed. There's been no sudden uptick in crime. And despite referring to "complicated issues," Christie has not articulated the reason for his reticence about medical marijuana (except for everyone's favorite stalking horse, the slippery slope) and it's hard to imagine why this particular part of it is complicated except from a political and polling standpoint.