Bradley Manning, Not Guilty of Aiding the Enemy, Faces 136 Years in Prison 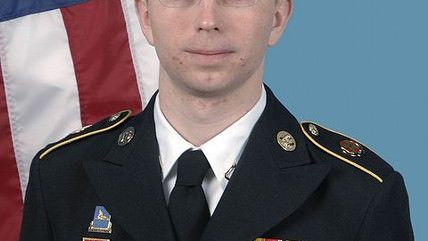 Click here for an outline of the verdict with maximum possible sentences for each charge.

The charges Manning has been found guilty of do not have mandatory minimums.

Manning's defense team has asked judge Col. Denise Lind to merge two of the espionage convictions and two of the theft convictions. If Lind agrees to the defense's request Manning faces a maximum of 116 years in prison.

While Manning supporters might be celebrating the fact that Manning was found not guilty of aiding the enemy, which carries a potential life sentence, there is still the possibility that Manning could still spend the rest of his life behind bars.

Both the government and the defense will be calling witnesses for the sentencing phase of the trial, which could take weeks.

Before the verdict was released I moderated a discussion on Bradley Manning with independent journalist Alexa O'Brien, the Daily Beast's Eli Lake, and Adam Klasfeld from Courthouse News.

Reactions to the Manning verdict have been predictably diverse. John Malcolm from the conservative think tank The Heritage Foundation argues that Manning deserves to spend the rest of his life in prison. Some members of Congress welcomed the verdict, while Reporters Without Borders said that it was a blow to investigative journalism. Wikileaks' Julian Assange said the verdict was an example of "national security extremism."