If Public Employees Are Smart, They'll Turn Against Pensions, Too 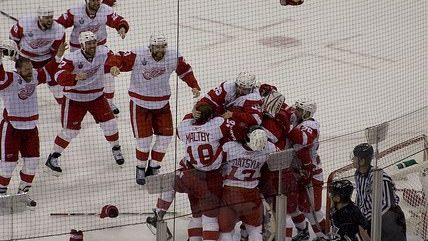 Over at Salon, David Sirota complains about the left vs. right mentality when analyzing Detroit's failure. Actually, he's really complaining about the right blaming employee pensions while ignoring the city's significant levels of crony capitalism. Even though Detroit has been ruled by the left since forever, this is somehow the right's fault:

Recall this is in the heart of a region whose governments infamously spent $55 million of taxpayer money in 1975 (or a whopping $180 million in inflation-adjusted dollars) on one professional football stadium, then spent another $300 million on yet another football stadium, then sold off the original stadium for just $583,000. Or, just note that Detroit is the largest city in a state that, according to the New York Times, spends more per capita on corporate subsidies — $672 or $6.6 billion a year — than most other states.

By focusing the blame for Detroit's bankruptcy solely on workers' pensions, rather than having a more comprehensive discussion that includes both pension benefits and corporate giveaways, the right can engineer the political environment for the truly immoral reality mentioned at the beginning of this article — the one highlighted this week by the Associated Press story headlined "Arena Likely Still On Track, Business As Usual For Sports Teams Despite Bankruptcy Filing." Yes, that's correct: at the same time government officials are talking about slashing the meager $19,000-a-year pensions of workers who don't get Social Security, those officials are promising that they will still go forward with a plan to spend a whopping $283 million of taxpayer money on a new stadium for the Red Wings.

Reason's Shikha Dalmia wrote extensively about Detroit's crony capitalism so I won't belabor the point that Sirota is fundamentally correct, though he's obviously flogging his own narrative and actually buying into the right vs. left argument even as he complains about it.

Crony capitalism is a bipartisan flaw, particularly on the municipal level, where politics is not about parties so much as personal influence and "bringing home the bacon." Even on the national level, the left under the Obama Administration is no stranger to tax breaks and incentives that favor certain industries.

That cities dominated by labor unions and leftist politicians for decades still manage to blow hundreds of millions of tax dollars and ruin pension funds (and here I'm pretending that this is all happening without the tacit approval of powerful unions who get short-term benefits from these projects in the form of labor agreements — their own version of "bringing home the bacon") should be a serious object lesson to progressives about the dangers of big government. If Detroit is not immune to this alleged right-wing tactic of raiding pension funds and blowing tax dollars on corporate subsidies, then who is? Who are those "right people" on the progressive side who are immune to such corruption? Where are they? Where have they been while all this was going on?

Sirota dismisses 401k-style programs for government employees as "Wall Street boondoggles," which is pretty dumb (where does he think pension fund investments go?), but right now if I were an adult just getting into government work, I would be begging for such a program. At least I'd actually be able to know what I'm getting when retirement comes around. I may ultimately be drawing less per year from my 401k fund than a current Detroit government employee, but as they're discovering, that amount exists mainly on paper. Mine will be real.

Over at Bloomberg, Eileen Norcoss and Roman Hargrave make some additional arguments about how the government is the biggest threat to the pension system.