Is Edward Snowden a Lawbreaker?

Or did he simply act against unjust legislation? 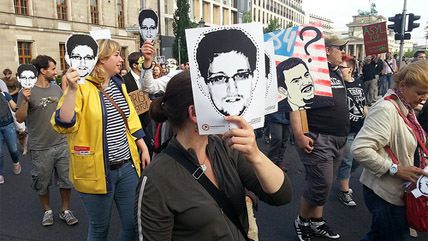 Most people believe that Edward Snowden, who has confirmed that the U.S. government spies on us, broke the law. Even many of his defenders concede this.

While in one sense the statement "Snowden broke the law" may be trivially true, in another, deeper sense it is untrue. He may have violated the terms of legislation passed by Congress and signed by a president (criminal intent would have to be proved), but a venerable line of thought says legislation is not the same thing as law. (F.A. Hayek drew the distinction, obviously, in Law, Legislation, and Liberty, volume 1: "Unlike law itself, which has never been 'invented' in the same sense, the invention of legislation came relatively late in the history of mankind.") Legislation may reflect the law, but it may also contradict it. In this line of thought, which dates back to antiquity, "law" refers to natural law. Any legislative product that conflicts with the natural law, so this philosophical tradition holds, is no law at all.

was once, and indeed for over two millennia, the dominant position in western philosophy of law.… This doctrine was upheld by Socrates, Plato, and Xenophon, by the Stoics and by Cicero, by Augustine and Aquinas, and by Blackstone as well. The traditional idea was that law must be distinguished from mere force by its authority, and that nothing unjust could have genuine authority. ["Inside and Outside Spooner's Jurisprudence"; link will download an unpublished paper in Word format.]

The great American libertarian political philosopher Lysander Spooner (1808–1887) applied this principle in his characteristically consistent and rigorous manner. Indeed, Long notes that Spooner took the principle further than his predecessors "because traditional natural law theory recognises positive law as an additional source of obligation," while Spooner's post-Civil War writing "maintains that legislators cannot add any new obligations to the body of law." (In his paper, Long distinguishes between Spooner's prewar and postwar thinking on the relationship between natural law and positive law, but says "the difference … is not as great as it might appear." See the paper for details.)

In 1882 Spooner defined natural law as "the science of justice" discoverable by reason:

the science of all human rights; of all a man's rights of person and property; of all his rights to life, liberty, and the pursuit of happiness.

In his 1886 "A Letter to Grover Cleveland," Spooner elaborated on what natural law is:

Let me then remind you that justice is an immutable, natural principle; and not anything that can be made, unmade, or altered by any human power.

It is also a subject of science, and is to be learned, like mathematics, or any other science. It does not derive its authority from the commands, will, pleasure, or discretion of any possible combination of men, whether calling themselves a government, or by any other name.

But if that is so, where does it leave the so-called "lawmakers," the people who solemnly issue decrees from their exalted seats in Congress, state legislatures, and city councils?

Lawmakers, as they call themselves, can add nothing to it, nor take anything from it. Therefore all their laws, as they call them, — that is, all the laws of their own making, — have no color of authority or obligation. It is a falsehood to call them laws; for there is nothing in them that either creates men's duties or rights, or enlightens them as to their duties or rights. There is consequently nothing binding or obligatory about them. And nobody is bound to take the least notice of them, unless it be to trample them under foot, as usurpations.

Nothing binding or obligatory can be found in those decrees as such, Spooner said. In other words, the obligations of natural law — essentially not to trespass on the person and property of others — preexist and are not the result of anything that legislators say.

And if perchance Congress should pass a law that coincides with the natural law?

If they command men to do justice, they add nothing to men's obligation to do it, or to any man's right to enforce it. They are therefore mere idle wind, such as would be commands to consider the day as day, and the night as night.

Statutes forbidding murder, rape, torture, and theft, then, are redundant, adding nothing to our natural obligations as human beings. But legislation consistent with justice is the exception, not the rule. What, then, is the status of "laws" that contravene the natural law? Spooner answered,

If they command or license any man to do injustice, they are criminal on their face. If they command any man to do anything which justice does not require him to do, they are simple, naked usurpations and tyrannies. If they forbid any man to do anything, which justice could permit him to do, they are criminal invasions of his natural and rightful liberty. In whatever light, therefore, they are viewed, they are utterly destitute of everything like authority or obligation. They are all necessarily either the impudent, fraudulent, and criminal usurpations of tyrants, robbers, and murderers, or the senseless work of ignorant or thoughtless men, who do not know, or certainly do not realize, what they are doing.…

It is intrinsically just as false, absurd, ludicrous, and ridiculous to say that lawmakers, so-called, can invent and make any laws, of their own, authoritatively fixing, or declaring, the rights of individuals, or that shall be in any manner authoritative or obligatory upon individuals, or that individuals may rightfully be compelled to obey, as it would be to say that they can invent and make such mathematics, chemistry, physiology, or other sciences, as they see fit, and rightfully compel individuals to conform all their actions to them, instead of conforming them to the mathematics, chemistry, physiology, or other sciences of nature.

The "laws" that prohibit Edward Snowden (or anyone else) from telling us that the NSA routinely collects our telephone data and has access to our Internet records are decrees of the kind that "forbid any man to do anything, which justice could permit him to do." They are therefore "criminal invasions of his natural and rightful liberty."

Snowden should be left free, and those responsible for the spy programs should face justice.