Says he's never sold drugs out of his apartment, wasn't home during the raid 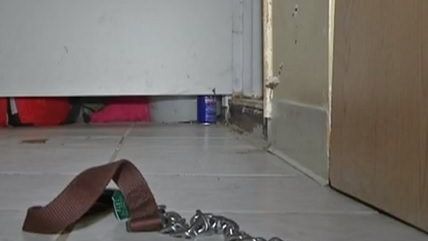 Drugs are so dangerous police will bust down the wrong door and shoot a dog to stop them from being sold. An Iraq war veteran says that's what happened to him after he left for work Monday. From local TV station WIVB:

"I got here as fast as I could [after the landlord called about a police raid] and I saw the carnage. I saw what happened. My house was flipped upside down, my dog was gone," he said.

Cindy had been killed and Arroyo looked at where she died in horror.

"It was the blood on the wall and the gunshots and the bullet holes," he said.

Buffalo Police say controlled drug buys are made before raids take place and they believe they had the right address. Detectives on scene say the dog was not chained at the time.

"You can even tell by the scene where the shots were and how far the chain reaches because if the dog was out anywhere else, as soon as someone knocks on my door my dog is by the door. So how come there is no blood on the ground?" asked Arroyo.

Arroyo explained he's always chained his pit bull because she chews up his shoes when he's not home. Buffalo police say they've opened an internal investigation while Arroyo says he's lawyering up.