The Legacy of Frank Lautenberg

The late Sen. Frank Lautenberg's true legacy is one of entrepreneurship. 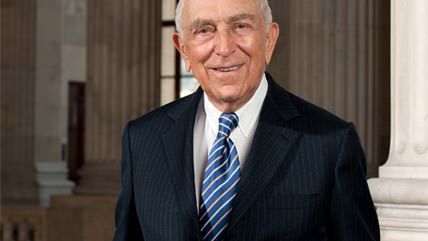 Others will remember Frank Lautenberg, the Democratic senator from New Jersey who died today at age 89, for his career in government. To me the more fascinating story is his career in business.

Because the company where Lautenberg spent the 30 years from 1952 to 1982 — longer than the time he spent in the Senate — is a classic example that manages to encapsulate both the genius and the risks of a certain kind of American business.

It was the success of that company — now Automatic Data Processing, Inc., or ADP — that made Lautenberg the fortune recently estimated at between $55 million and $116 million. That money is what made him a player in politics to begin with as a donor and as a self-financed candidate.

The growth of the company is a tribute to what is possible in America. The company was founded in 1949 as Automatic Payrolls, Inc. by brothers Henry and Joseph Taub, who worked, according to a 2011 New York Times obituary of Henry Taub, first in an office above a Paterson, N.J., ice cream parlor, then in a hotel basement. Lautenberg, the son of what the Times describes as Jewish immigrants from Poland and Russia joined as the fifth employee and recalled "lots of seven-day workweeks, lots of 12-hour days." The Times obituary of Taub describes him as cleaning his own office at night and delivering payrolls by bus. Now the company — Lautenberg eventually became the CEO — has 57,000 employees, $10 billion in annual revenues, and says it pays one in six American workers.

In addition to the old-fashioned value of hard work, the business grew by taking advantage of some newer phenomena — computers, outsourcing. The company history on the ADP corporate Web site reports that the firm leased its first computer from IBM in 1961. It had started using punch cards in 1957. These were big advances compared to using a printed table to calculate a payroll by hand. And the rise of outsourcing meant that as time went on, as the ADP web site puts it, more and more companies "no longer wanted ADP to provide services to their HR department…they wanted ADP to be their HR department."

There's a whole set of businesses that have succeeded by saving customers money or time — Walmart, Amazon. ADP is a business that succeeded by saving its customers, other businesses, money, because it was cheaper to have ADP run the payroll (or handle the other human resources administration) than to hire someone to do it in-house.

Finally, more recently, ADP has grown internationally, acquiring companies based in France, Germany, and the United Kingdom. The company says it serves clients in more than 125 countries and says it is the largest provider of human resources services in Europe, in Latin America, and in the Pacific Rim.

It all adds up to what sounds like a great capitalist success story — hard work, efficiency, globalization, mutually beneficial voluntary exchange, growth. What's the downside?

The downside is that the rise of ADP coincided, in America at least, with the rise of the payroll taxes and deductions — for income tax withholding, for Medicare, for Social Security, and for an employee's pretax contributions to retirement accounts and to employer-paid health-insurance. ADP makes managing these programs more simple for employers and employees, in much the same way that TurboTax makes filing your annual taxes easier. That simplification, though, is something of an illusion; by reducing the burden of compliance for businesses into a payroll processing fee, ADP allows employers just pay the fee and deal with ADP rather than confront directly the mind-boggling morass of paperwork that goes into complying with the various state and federal regulations and bureaucracies governing unemployment insurance, withholding taxes, and the like. Without all that complexity, there's not much of a business for ADP; businesses could pay their employees the same way they pay their rent, or the electric bill, simply by cutting a check (or sending an electronic payment).

So make no mistake about it, the firm that made Lautenberg his fortune and that in turn, in some sense, helped to elect him to the Senate, is an American entrepreneurial success story worth celebrating. But if America had a smaller and less intrusive government that imposed fewer and more simple taxes and regulations on employers and employees, the Taub brothers and Frank Lautenberg might have applied their formidable business skills to innovation in some other field than making it easier for job creators to comply with rules that are ridiculously complex. The risk is that more and more of America's entrepreneurial energy is devoted to helping businesses navigate around obstacles that don't really need to be there in the first place.