Can't Buy a Cold Beer at Convenience Stores in Indiana 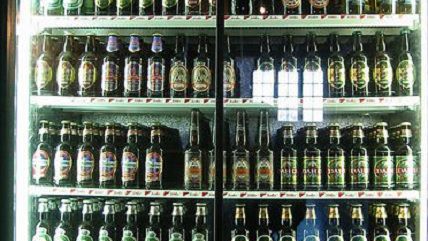 Indiana is apparently the only state in the union that* regulates alcohol by its temperature, forcing convenience stores to sell warm beer. Those stores are now suing the state alcohol and tobacco commission.

"The constitutional claim at issue are pretty simple," said attorney John Maley.  "It's to be treated equally, to be treated fairly."

One of the things pointed out in the lawsuit is the fact that convenience stores in Indiana can sell cold wine.

Probably anybody that has a convenience store in Indiana, if they give this right," said Imus, "They're immediately going to go down and apply for a building permit and build a beer cave."

And if nothing changes, they say, investment will go elsewhere.

*Update: A reader writes in to let us know the state of Oklahoma also regulates alcohol sales by temperature, mandating any liquor with more than a 3.2 percent alcohol content be sold at room temperature.