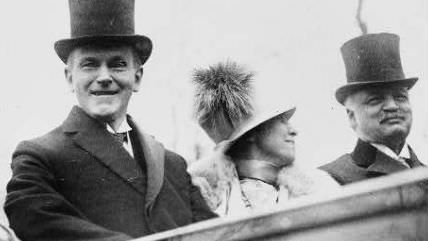 If there was ever a time when the president could simply preside, it has long passed. As early as the Eisenhower era, political scientist Clinton Rossiter observed that the public had come to see the federal chief executive as "a combination of scoutmaster, Delphic oracle, hero of the silver screen, and father of the multitudes." Under the pressure of public demands, the office had accrued a host of responsibilities over and above its constitutional ones: "World Leader," "Protector of the Peace," "Chief Legislator," "Manager of Prosperity," "Voice of the People," and more.

To that daunting portfolio add "Feeler-in-Chief," a term coined in all earnestness by New York Times columnist Maureen Dowd in 2010 while lashing out at Barack Obama for being insufficiently emotive about the BP oil spill. Obama, she wrote, had "resisted fulfilling a signal part of his job: being a prism in moments of fear and pride, reflecting what Americans feel so they know he gets it."

Poor MoDo would have kicked the cat in sheer frustration if confronted by the implacable, inscrutable Calvin Coolidge, whose reaction to the presidency's more unreasonable demands was a Bartleby-like "I prefer not to." Shortly after taking office in 1923, Coolidge informed the press that he did not intend "to surrender to every emotional movement" toward executive cures for whatever ails the body politic. In the midst of the Great Mississippi Flood of 1927, which killed hundreds and left some 600,000 Americans homeless, Coolidge resisted calls for federal relief, even refusing a request by NBC that he broadcast a nationwide radio appeal for aid.

In her new biography, Coolidge, Amity Shlaes, Bloomberg News columnist and author of The Forgotten Man: A New History of the Great Depression, suggests that in our current era of fiscal and emotional incontinence, we have much to learn from this parsimonious president. And while the journey through Coolidge can be dull at times, Shlaes demonstrates that there's something to be said for boring chief executives.

"Debt takes its toll," Coolidge begins. Shlaes underscores that point with an absorbing anecdote about one of Cal's forebears, Oliver Coolidge, who in 1849, for want of 30 bucks to pay off a creditor, suffered through a stint in debtor's prison. "Lame in one leg from birth," Oliver, the brother of the president's great-grandfather, had never been able to farm the rocky land of southeastern Vermont as well as the other Coolidges. And so, at age 61, he found himself behind bars, cursing his brother, sending out "despairing letters to one family member after another."

In Shlaes' hands, Oliver's captivity and subsequent redemption—after his release he headed west, where he and his family began new lives—serves as a metaphor for the horrors of debt and the virtues of Yankee perseverance. "The very area that plagued Oliver" saw "the greatest persevering of Calvin Coolidge," Shlaes writes. "Under Coolidge, the federal debt fell"; under Coolidge, after "sixty-seven months in office, the federal government was smaller" than when he'd found it.

Here was "a rare kind of hero: a minimalist president," Shlaes posits. And although history remembers "Silent Cal" mostly for his reticence and frequent napping, Shlaes reminds us that "inaction betrays strength." In politics, it's often easier to "do something," however unwise, than it is to hold firm. "Coolidge is our great refrainer," she concludes.

Alas, after Coolidge's elegant introduction, the sledding gets much tougher. Long stretches of this 456-page tome read like an info dump from Shlaes' clearly formidable research files. Like the hardscrabble farmers of Plymouth Notch, you need to set your jaw grimly and persevere through a long winter of sentences that should have been left on the cutting room floor, such as: "Coolidge met with [Budget Director Herbert] Lord six times and reduced a tariff on paintbrush handles by half, his second cut that year, the other a reduction in duty on live bob quail." Shlaes should have followed the example of her famously taciturn subject, who in his 1915 opening address as president of the Massachusetts Senate delivered a crisp little homily of 44 words, ending in "above all things, be brief."

Still, the level of detail Shlaes provides inspires reflection on the vast gulf between today's GOP and the grand party of old. Presidents Warren Harding and Calvin Coolidge cut taxes and shrank spending. They were pro-peace and anti-wiretapping. They embraced "normalcy" instead of stoking fear. And—go figure—they were popular. Today's Republicans could profit from studying their example.

Tax cuts were central to Coolidge's legislative program, and he believed, correctly, that under the prevailing conditions (the top rate had crept above 70 percent during World War I) they'd lead to increased revenue. But unlike modern supply-siders, Coolidge attacked the beast of government head-on, instead of hoping to "starve" it indirectly. "I am for economy," he said in 1924. "After that, I am for more economy." He vetoed farm subsidies and new veterans' benefits, and Shlaes reports that he spent a great deal of time "plotting to fend off military spending demands."

The tax cuts that Coolidge and Treasury Secretary Andrew Mellon orchestrated took millions of people off the tax rolls. Unlike Mitt Romney, Coolidge and Mellon didn't worry that they'd created a new horde of "takers." By 1927, as it became clear that top earners were providing more revenue at lower rates, Mellon boasted that their policy had transformed the income tax into "a class rather than a national tax."

On foreign policy, Coolidge "deemed international law the best approach to prevent war," backing the somewhat quixotic Kellogg-Briand Pact to outlaw the practice. Coolidge being Coolidge, he took a green-eyeshades view of the matter: "It pays to be at peace." But peace also allowed greater protection of civil liberties. Shlaes notes that Coolidge "removed William Burns, the head of the Bureau of Investigation, and curtailed wiretapping, one of Burns's favored tools." (Alas, he replaced Burns with young J. Edgar Hoover.) Coolidge also finished the job of freeing the World War I protesters jailed by Woodrow Wilson. Harding had pardoned 25, including Socialist Party leader Eugene Debs. Coolidge ordered the release of Wilson's remaining political prisoners.

It's an admirable record, particularly considering the shape the country was in after Professor Wilson's reign. Weighed down by debt and wartime controls, plagued by unemployment, the country seemed "lost, if not cursed," Shlaes writes. "Yet within a few years the panic passed and the trouble eased.…The reversal was in good measure due to the perseverance of one man": Coolidge.

"One man"—Coolidge? Poor Warren G. Harding: He's become the Rodney Dangerfield of American presidents. The odious Wilson is a perennial top 10 favorite in the presidential rankings, those "polls by which court historians reward warmarkers and punish the peaceful," as the independent historian Bill Kauffman recently put it. Harding, Wilson's successor, is nearly always dead last. (Was the Teapot Dome scandal really worse than 117,000 dead doughboys?)

It pains me to see Warren G. get short shrift here too, especially from an author who appreciates presidential minimalism. Shlaes writes that "Coolidge hacked away at the federal budget with a discipline sadly missing in his well-intentioned predecessor." Harding may not have been the most disciplined of men, but of the two he was the more accomplished budget cutter. By the time Coolidge took the oath after Harding's death, federal spending had been cut nearly in half, leading to large government surpluses.

This is a biography, after all, so what about Coolidge the man? At times Shlaes lets admiration for her subject drift into hagiography. "Always, a philosophy of service inspired Coolidge," she insists. That's one way of putting it. Another is H.L. Mencken's observation in 1924: "Coolidge is simply a professional politician," he wrote, and a very "dull one" at that. "He has lived by job-seeking and job-holding all his life; his every thought is that of his miserable trade."

At times, Coolidge makes it hard not to agree with Mencken's harsh assessment. Despite her best efforts, Shlaes' Coolidge often seems like a grim, boring striver, given to expressions as petulant and morose as Morrissey lyrics. Writing to his father from his berth at Amherst College, young Cal groused, "I never earned any money and I do not know as I ever made any happiness." Telling a onetime love interest that he forgave her rejection, he signed off one letter, "I am so tired."

Clearly, this was a man with a melancholic temperament. It would get worse after the death of his 16-year-old son, Calvin Jr., from sepsis in 1924, due to a blister caused by playing tennis on the White House courts. In his 2003 book The Tormented President, Robert E. Gilbert argues that this tragedy is key to understanding Coolidge's performance in office, which, like most presidential rankers, Gilbert views negatively. Cal Jr.'s death left Coolidge "clinically depressed" throughout the bulk of his presidency, Gilbert writes, "a broken man, waiting passively, distractedly, indifferently to lay down the heavy burdens of office."

Interesting, if true. But aside from passing references to Calvin's crabby moods and the distance between him and the first lady, Shlaes isn't terribly interested in the president's psyche.

For my money, she makes too little use of Coolidge's spare and powerful Autobiography. There's a passage therein about the death of his son where Silent Cal's Old WASP reserve cracks just slightly. You can tell that as a dad, he wasn't full of hugs, but the pain and anger that lie under the surface of these words is all the more palpable for his tight-lipped refusal to let it gush forth: "In his suffering he was asking me to make him well. I could not. When he went the power and the glory of the Presidency went with him. The ways of Providence are often beyond our understanding. It seemed to me that the world had need of the work that it was probable he could do. I do not know why such a price was exacted for occupying the White House."

The conventional wisdom overvalues presidents who enjoy the job. In his influential 1972 book The Presidential Character, political scientist James David Barber argued that we should pick presidents by their personality type. The "active-positive" president—the ideal voters should seek—tackles the job with manic energy and zest, and "gives forth the feeling that he has fun in political life." The "passive-negative" sees the office as a matter of stern duty, and his "tendency is to withdraw." Among Barber's "active-positives" were troublemakers FDR, Truman, and JFK; his "passive-negatives" included the Cincinnatus-like figures Washington, Eisenhower, and, of course, Coolidge. Maybe we should give the job only to people who are so depressed they can barely get out of bed.

Mencken's initial disdain for Coolidge mellowed as the '20s receded. After the ex-president's sudden death from a heart attack in 1933, Mencken eulogized that, for all Coolidge's faults, "the itch to run things did not afflict him.…He never made inflammatory speeches.…No bughouse professors, sweating fourth-dimensional economics, were received at the White House." After Wilson's reign of terror, Americans wanted peace, "and simple peace was what Dr. Coolidge gave them."

Given the "World-Savers" that preceded and followed Cal, Mencken said, "he begins to seem, in retrospect, an extremely comfortable and even praiseworthy citizen. His failings are forgotten; the country remembers only the grateful fact that he let it alone." There are, Mencken observed, "worse epitaphs for a statesman."

Gene Healy is a vice president at the Cato Institute and the author of The Cult of the Presidency: America’s Dangerous Devotion to Executive Power (Cato 2008) and Indispensable Remedy: The Broad Scope of the Constitution’s Impeachment Power (Cato Institute).