Peter Suderman | From the December 2012 issue 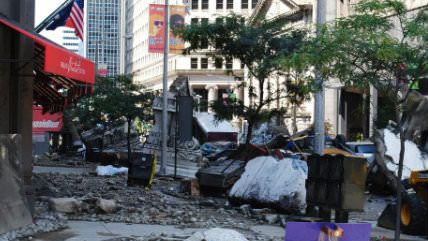 This summer's most colossal box-office winner was writer-director Joss Whedon's big-budget, big-screen adaptation of the classic Marvel superhero comic The Avengers. The movie, a sprawling crossover featuring Captain America, Iron Man, Thor, the Hulk, and assorted members of the fictional global security force S.H.I.E.L.D., had raked in more than $622 million at the domestic box office as of September, nearly three times what it reportedly cost to make.

Much of that budget went to creating the film's epic superhero stunts and special effects, including a knock-down, drag-out 30-minute finale in which the heroes face off against a horde of alien invaders on a viaduct in downtown Manhattan. One catch: Almost none of the finale was shot on the streets of New York. Instead, the filmmakers relied on a combination of alternative locations. For some of the character close-ups, they recreated the signature Big Apple bridgeway in front of a giant green screen inside an abandoned train station in Albuquerque. For the bulk of the street scenes, they relocated to a city not commonly mistaken for America's most prominent metropolis: Cleveland.

Cleveland, a struggling Midwestern city with a population that has steadily declined from more than 500,000 in 1990 to 393,000 in 2011, got the once-in-a-lifetime chance to act as a body double for Manhattan, central borough of the city that never sleeps, population 8.24 million and rising. But not without a makeover: The movie's production designers imported New York taxis, building facades, and street signs—along with a healthy supply of premade rubble—in order to replicate the look and feel of an invaded midtown Manhattan.

Why Cleveland? The decision to film in the Forest City can be explained in two words: tax subsidies. The State of Ohio Film Office offers moviemakers large and small a tax break amounting to between 25 percent and 35 percent of wages and other spending doled out within the state. Because the credit is refundable, it's more than just a break on taxes the production might have paid. It's a payment—essentially a thinly disguised subsidy—doled out to silver-screen types who do business in the state.

That's a good thing, according to Ivan Schwarz, executive director of the Greater Cleveland Film Commission. "Let me put it this way," Schwarz said to Cleveland.com last summer. "I think everyone in Cleveland is going to know The Avengers is in town."

They'll certainly be paying for it. All told, The Avengers received credits worth about $6.7 million, according to the state's Department of Development.

The Avengers isn't the first superhero flick to blow up Cleveland instead of New York. The 2007 trilogy capper Spider-Man 3 used the city's theater district to film several explosive street scenes. Nor are superheroes the only beneficiaries. George Clooney's political thriller The Ides of March also cashed in on Ohio's credit last year. (Clooney's gang managed to double dip, picking up subsidies from Michigan as well.)

Lawmakers in the Buckeye State and elsewhere tout the tax credit as a way to create jobs, bring national attention to flyover cities, and eventually create a thriving film production industry. And they've doubled down on the money they're willing to dole out, increasing the funds available for the credit from $10 million to $20 million this year. During the summer, Rep. Mike Dovilla, a Republican state representative who helped sponsor legislation to expand the credit, bragged in a campaign flyer that "big ideas like expanding the Ohio Motion Picture Tax Credit, which helped bring films like The Avengers to Cleveland, have helped make our state No. 1 in the Midwest for job creation."

But state-based film tax credits are a big idea without a big payoff. Currently 43 states offer the subsidies, which are worth a total of $1.5 billion. Multiple government reviews of those credits in states such as Michigan and Massachusetts have concluded that the subsidies typically fail to pay for themselves. Instead, states end up losing money paying for film productions that in many cases would have happened with or without the tax incentives.

The Avengers' main competition at the summer box office proves the point. The Dark Knight Rises, rival comic publisher DC's Batman film, chose to cast Pittsburgh as Gotham, the Caped Crusader's fictional home city. And although Pennsylvania offers a film tax credit, the production didn't use it. The Avengers may be the World's Mightiest Heroes, but the Dark Knight managed to rise without any help from taxpayers.