Environmental Law in the Roberts Court


Environmental law constitutes a decent sliver of the Supreme Court's caseload, but none of the current justices seems to have much interest in environmental law, as such—or so I argue in my new article, "Which Way for the Roberts Court?", the cover story for the November/December 2020 issue of The Environmental Forum, published by the Environmental Law Institute. 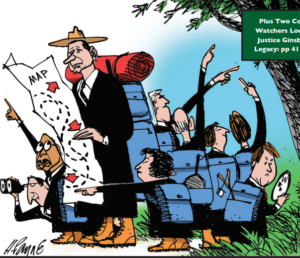 Here is a taste of the article:

The justices tend to focus on the underlying legal questions, not the ecological concerns that may have led policymakers to adopt a given regulation or environmental groups to file suit. If the case involves how a statute should be interpreted, the justices will focus on statutory interpretation. If it centers on a question of administrative procedure, then the justice's respective doctrinal commitments on questions of administrative law will drive the decision. And so on. Ecological considerations are, at best, window dressing, and do not provide the rules of decision. The justices are more concerned about how to read a statute or limits on federal regulatory authority, writ large, than they are on the ecological dimensions of their decisions. This creates challenges to environmental advocates but it may also create opportunities.

The article was largely completed before Justice Ginsburg's passing, but I think the underlying thesis holds. Her death does not affect my assessment of the past fifteen years, but her potential replacement could definitely affect the course of environmental law at the Supreme Court in the future.